Just to round it off, here’s the story of Bart in images. I will be adding final images once Bart is on display in Grassington. 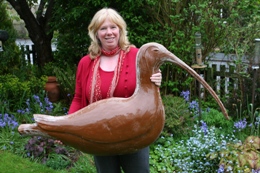 With me holding him you get a good idea of the size of Bart and the task ahead!

The plastic template was 1.75m long and to turn it over during the laying out process I had to wind it up on a broom handle and then unwind it the other way, treating it just like pastry. I laid out the base layers in Bluefaced Leicester which I then covered with the hand dyed and carded Swaledale fibres.

I think he looks quite good laid out with all the flowers on and with a curly fleece chest. Cutting him in half was a bit nerve wracking as I had to avoid cutting through flowers on either side.

When dry I sewed the two halves together onto Bart and then re-commenced felting him. As you can see he had to be turned all ways up for this process.

He looks splendid sitting on the lawn and I am pleased with how he’s turned out.

Taking him to the workshop for his legs fitting was really interesting, watching him be drilled and riveted and then fitted onto the stone. It made my day and I felt like I was then handing over a whole bird. I know you don’t get a sense of size from this photo but he is now approximately four and a half feet tall. I’ll add more pictures of the finished Bart once he goes on display.