I’ve had in my mind to create more felt to use outdoors but also for it to be inspired by the outdoors and to incorporate found objects where possible. The first piece (below) I’d been thinking of for quite some time. It’s based on a ceramic ball which I bought 3 or 4 years ago for the garden. It was a little too pale but I thought it would weather in. It didn’t and each time I spotted it I was offended as it always seemed to stick out rather than blend in. What better to do with it then, than to cover it in felt.

It was/is my intention to replace it in the garden. I was inspired by the sea colours of the fibres I recently blended and decided that it would be perfect for this project. Changing the shape slightly and breaking the silhouette was also high on my list so as I ruminated about the sea, I was inspired by thoughts of limpets, sea anemones and waves.

I’ve used different coloured layers of fibres in the felt so that I can cut into it at the end and peal back some leaf shapes. This will further change the shape and reveal a very nice purple and, if memory serves me, a lime green.To create shapes under the felt I made some large felt balls and cut them in half. You can see that I glued them onto the ball with a hot glue gun but as soon as I started to work with the wet felt, they dropped off. In the end, I secured them with a couple of stitches just to hold them in place whilst I worked on the rest.

The wiggly pieces (sea anemones to my mind) on top are just rolls of felt with pipe cleaners in the centre. I decided to use the pipe cleaners for two reasons. Firstly, so I could rebend them into any shape I wanted should I be bored whilst in the garden and secondly, to ensure that if they get soaking wet they won’t just go floppy on me. The waves are represented by the ridges around the ball. Some of the larger ones I stitched in to help me hold them in place, the rest were just moulded in as I went along. 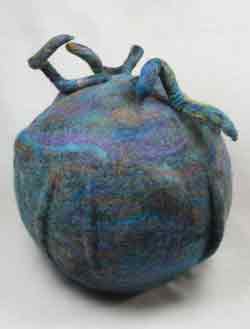 This project has worked out very well, I’m pleased with it and have called it Seaquest. There are still two questions to be answered though:
1. Do I keep it indoors or put it back out in the garden? I really can’t decide
2. Do I cut into it and reveal some of the colours underneath? I might just have to live with it as it is for a while longer.

If you fancy bringing the outdoors into your life, I’m running a workshop on Saturday 24th April where we’ll explore incorporating items like shells, pine cones, pebbles and beach glass. It’ll be a fun day.

One Reply to “Bring the outdoors in or leave it out?”