I thought I’d share with you what I’ve been up to recently. It all started with an old blue cushion made from recycled silk saris. The cats loved it (far too much) and my daughter played with it (far too roughly). The result was that the silk had torn in several places and a few pieces had even come off. I hung on to it though because I liked it so much, until one day I looked at it and thought it really had disintegrated too far.

Not one to throw things away willy nilly, I carefully deconstructed the cushion and am able to re-use everything except the zip which broke when I was taking it out.

If you look closely you can see the silk is worn through in places, has torn edges and has faded. Of course, brown is a classic combination with blue so it was the first colour I thought of to make a notebook cover and to set off the colour of the silk. 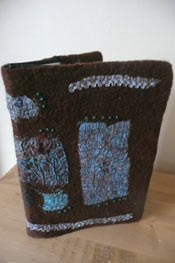 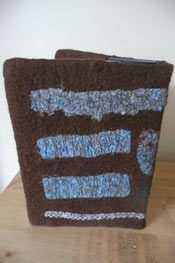 I’ve named it Faded Glory as that’s how I remember the cushion. The decoration is mainly the silk plus a little of the bright blue muslin which formed the back of the cushion. Other than adding a few beads I’ve left it quite plain which is most unusual for me. It’s rapidly becoming one of my favourites and should make it’s way to my shop very soon.

Not content with one I went on to make second notebook this time using only the bright blue muslin for decoration. I decided to team it with a little jade green and a grey background. I’ve added a few silk fibres for sheen.

I’m still considering whether or not add a few beads or stitches to the circles and I don’t have a name for it yet so if you have any suggestions post them here. The colours on this one are beautiful and it’s noticeable how much brighter the muslin is on the grey background than it is on the brown. That’s the nuno effect of the fibres coming up through the fabric.

If you want to make a notebook cover of your own, take a look at my tutorial.