I’ve had this yarn in my stash for a while, it’s one of  my first handspun yarns that I thought was usable and is a green and turquoise Merino and silk blend. Being an early yarn it definitely has areas which are thick or thin and even some which are over twisted but it was still usable and I had a goodly amount.

Initially I tried it on 4mm needles but the knitting was dense and didn’t have the drape I was looking for so I restarted on 6mm needles which were much better, especially when I encountered a thick bit. The pattern is not a particularly difficult one, in fact I’d say it was quite easy but what attracted me to it was the yarn used in the photos and the fact that it would be long. I love long scarves and found this one as a free pattern on Ravelry.

It wasn’t many rows before I was running out of space on my needles but fortunately a friend loaned me a 6mm circular needle. My first ever circular needle to knit my first shawl using one of my handspun yarns for the first time. Whilst knitting it I have to say I wasn’t very keen and was planning on gifting it away and oh how that position has been reversed, it’s mine all mine. Better let you have a look at what I’m on about. 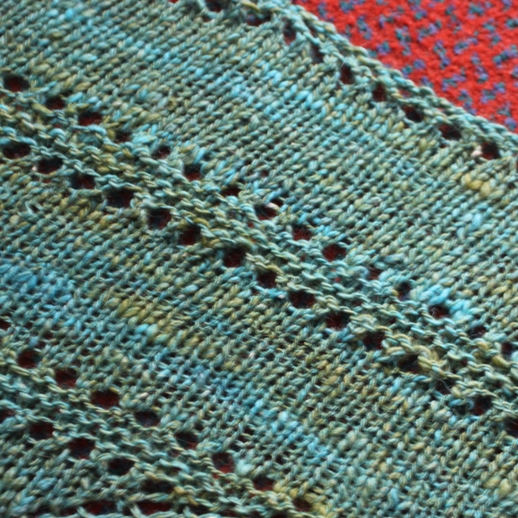 That’s it after washing, being blocked. 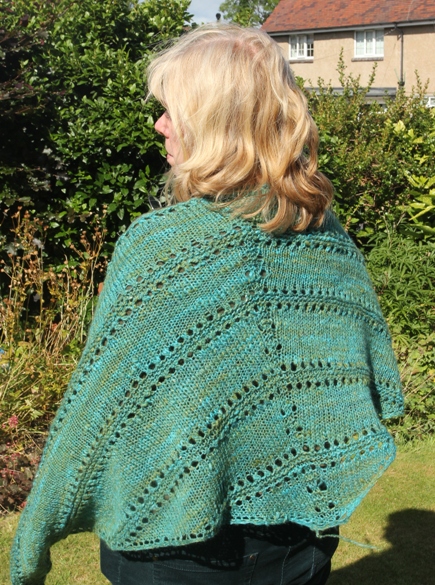 I couldn’t wait for it to dry in case the sun disappeared so it’ll have to go back on block later to dry. You can see it’s not a difficlut pattern and yet there was a section of about 10 rows where I had repeated brain malfunctions and had to keep unpicking the work. Not being brave enough to take it off the needles and rip it back I did this the slow laborious way, one stitch at a time! After a whole weekend of messing about I finally got beyond that section and then rapidly finished the shawl. 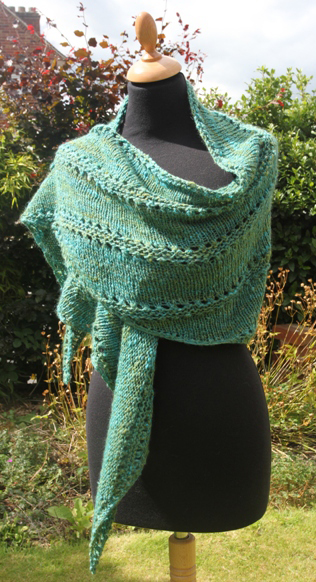 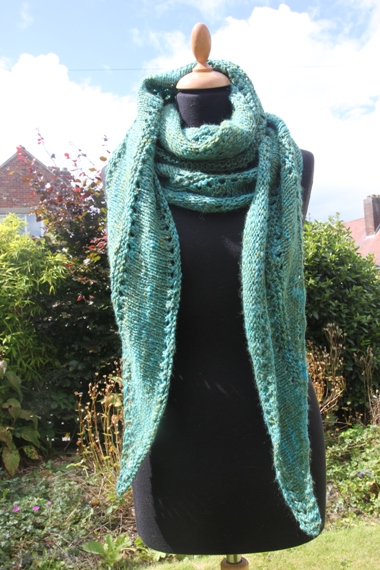 It felt important to me to use this yarn and to finish the shawl even if I didn’t like it. In case you were wondering, I love it and have already worn it. It did turn out to be very important to use it and has actually taught me quite a lot about the spinning of the yarn. I needed no help to understand that it wasn’t perfectly even but it was enlightening to understand how that felt in use. Uneven yarn isn’t a problem, there are plenty of yarns on the market which are exactly that but I’d not used one before. Having every inch of yarn back through my fingers helped me to understand how to spin my next yarn to achieve whatever effect I want. 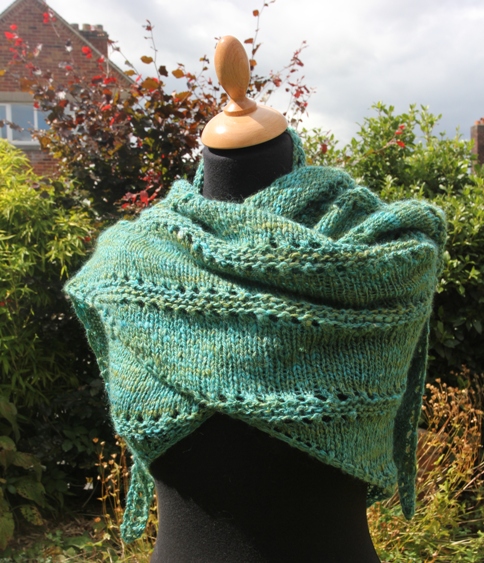 My spinning now is finer and much, much more even. It just goes to show that even imperfect yarns can look lovely made up. If you fancy learning to spin then why not come along to my spinning workshop on Thursday 11th September and let me introduce you to this ancient and absorbing craft. You’ll be amazed at how quickly you can catch on and start producing your own unique yarns.

p.s. Update on the remodelled skirt very soon, I promise.

2 Replies to “My first shawl”