This is the shape of bag I set out to create but not the colours! It just seemed a good idea to set myself an extra challenge to make this bag using nothing except what was in my cupboard. After laying down two layers of Blue faced Leicester wool I searched around for texture I could hide between the layers.

The felt cord had been hanging around for several years but I knew it would come in handy sometime and imagine my delight when it did! There was also discs of pref-felt and felt balls I could use. How is it that it’s absolutely ages since I made any felt balls and yet I always seem to have some hanging about.

Having found my texture and discovered just how many pre-felt pieces I had in the cupboard I decided that the outer layers of wool would be pre-felt. This has the added advantage of helping to trap the texture without the fibres slipping and revealing what’s beneath. We begin with a view of the back. 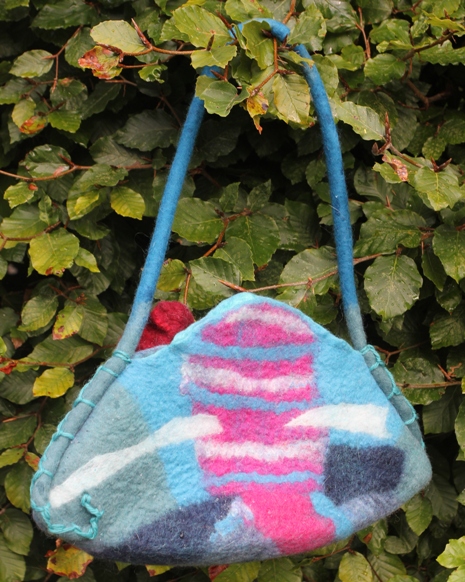 You can see the odd shaped pre-felt pieces, I rather like them. The felt cord handle was made separately and then stitched on afterwards with yarn. I wanted the stitches to be seen and form part of the texture of the bag. Now we have the front. 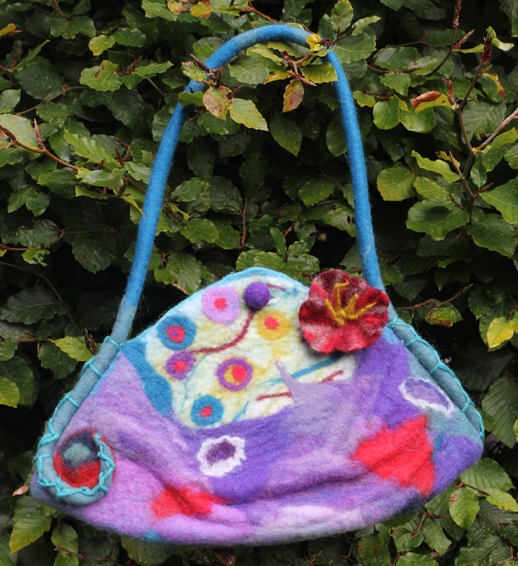 I know it’s busy and it shouldn’t work but I think it does and somehow this bag has snook ito my affections.

All pre-felts on the front too. The handle curls around a pre-felt which is hiding a felt ball and you can clearly see how large a texture using the sturdy cords between the layers has created.

There’s another felt ball for a fastening, this time passing through a cut in the felt. There are two inner pockets and the flower decoration was also found in my pre-felt bag. I believe someone started it at a workshop, fell out of love with it and I squirrelled it away for later. Just loving the extra dimension it adds.

I wonder if anyone has spotted that this bag and the one I showed yesterday were actually created on the same resist. It just goes to show that how you remove your felt from the resist has a huge impact on the shape.