Turquoise and orange are Charlotte’s (my daughter) favourite colours, so I made a garland for her house at uni. 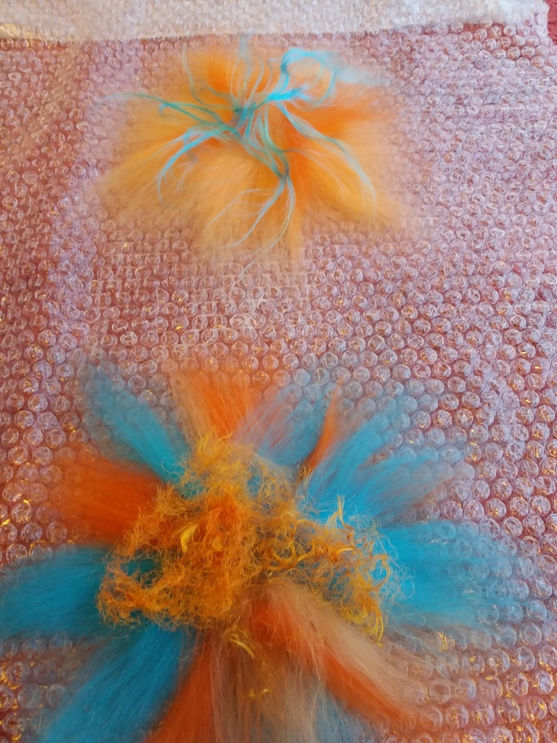 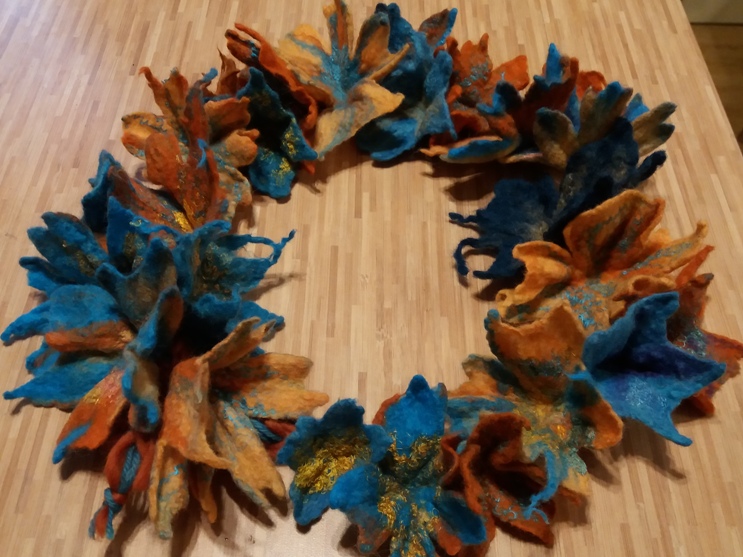 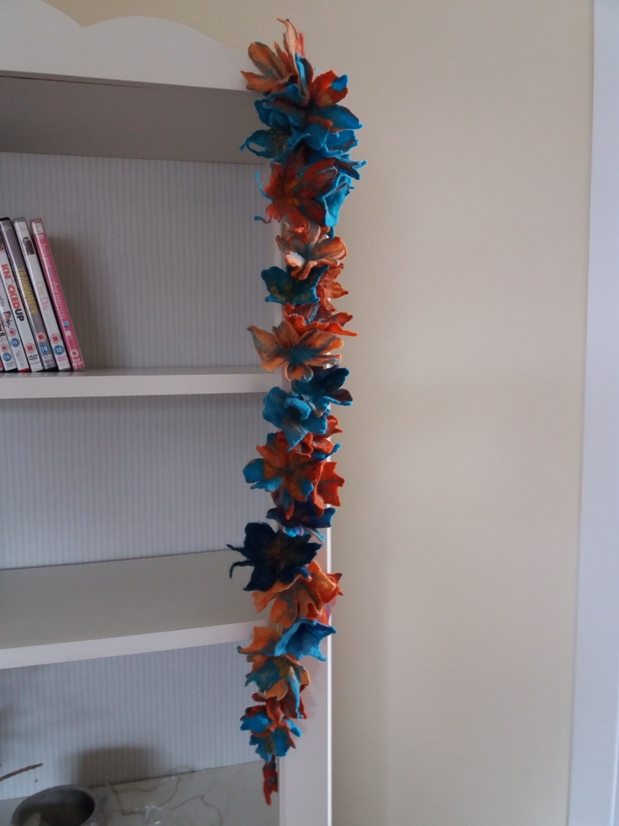 I’ve been very lucky this year. First my pots were featured as a header on the British Fibre Art Group on FaceBook and then that tuned into an entry for the 2019 calendar. 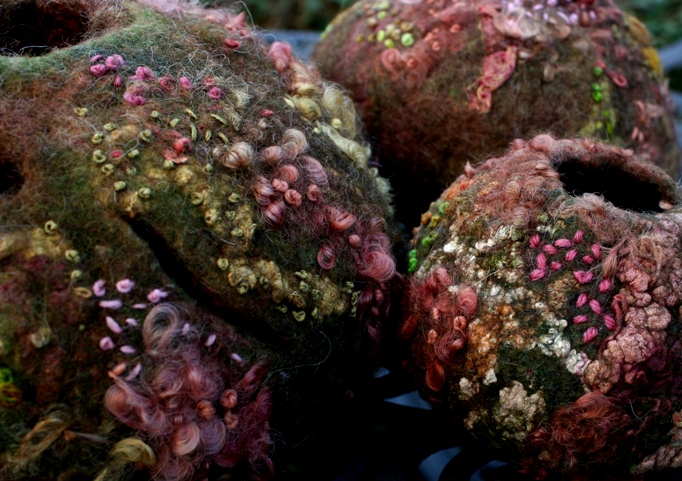 Now my wreath is featured in issue 12 of British Fibre Art Magazine, as the front cover no less! 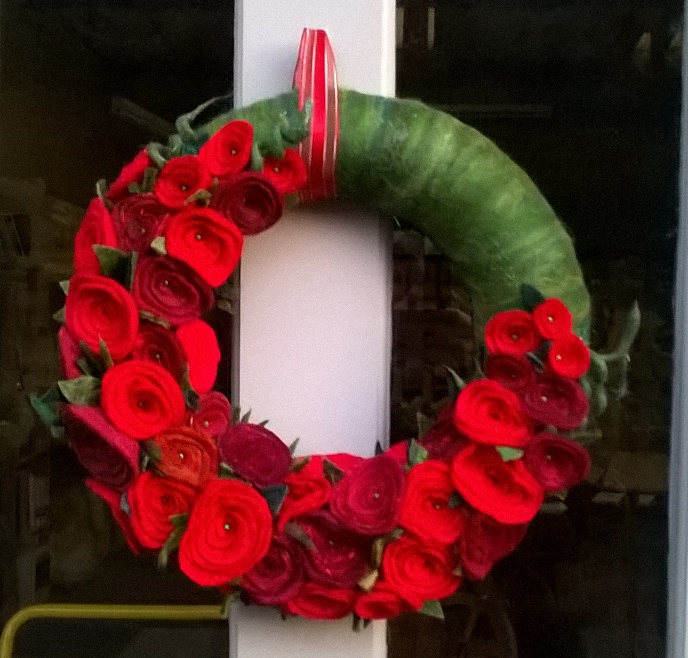 Chuffed to bits?  You bet I am.

Last year I used print at Armley Mills as part of three of my pieces for the Wool Stories – The Felted Mill exhibition. This time around I wanted to use print again and couldn’t help but revisit the wallpaper block I used last year plus one or two which belong to the same pattern. 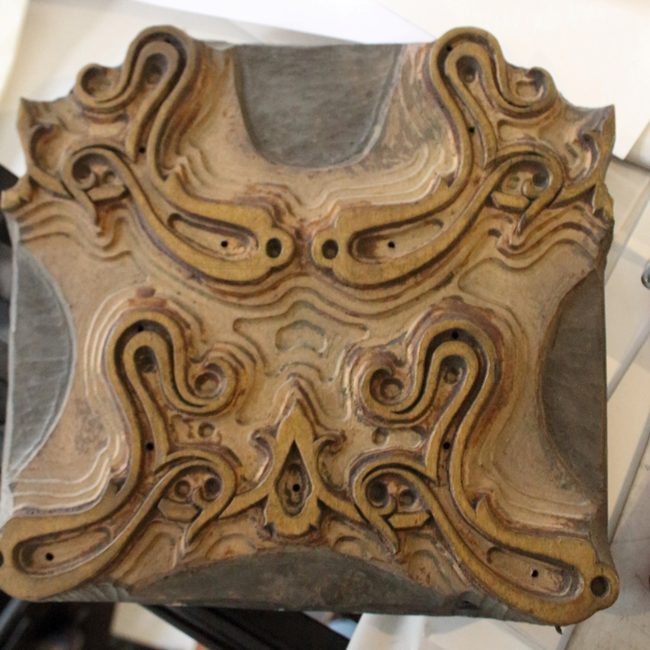 Now for the rest. 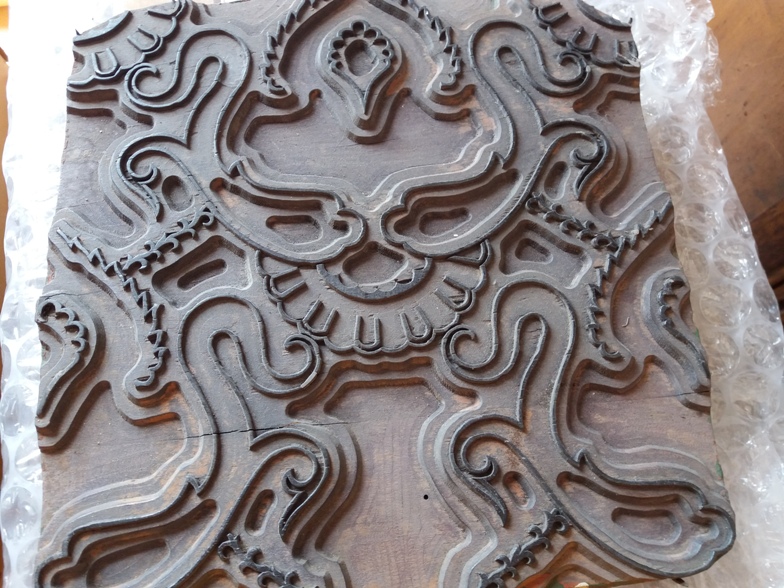 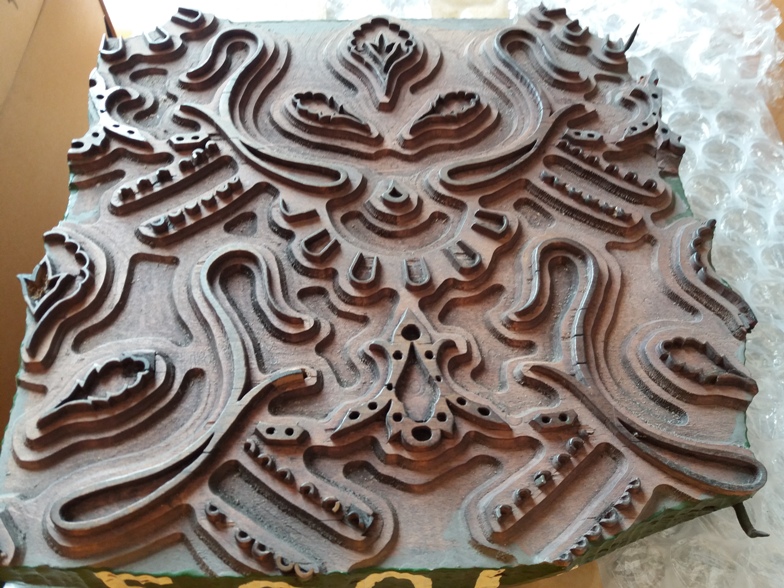 Here’s how they work in use 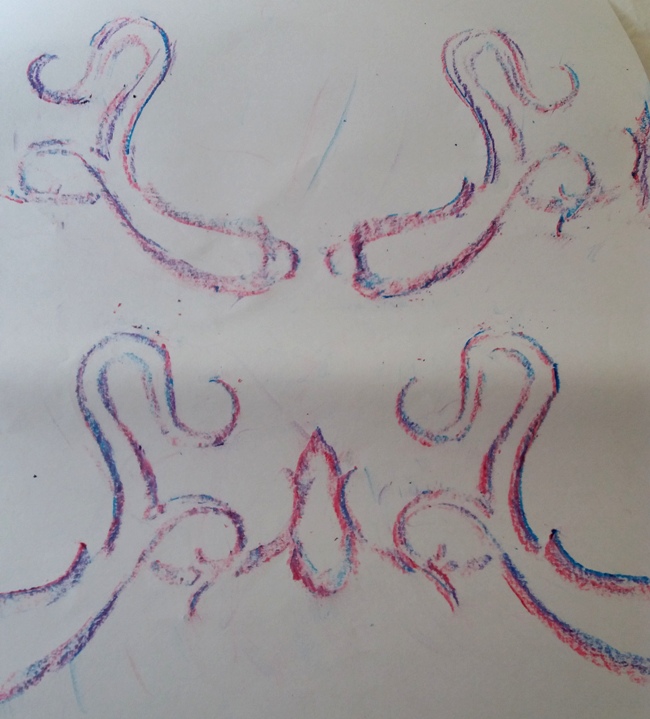 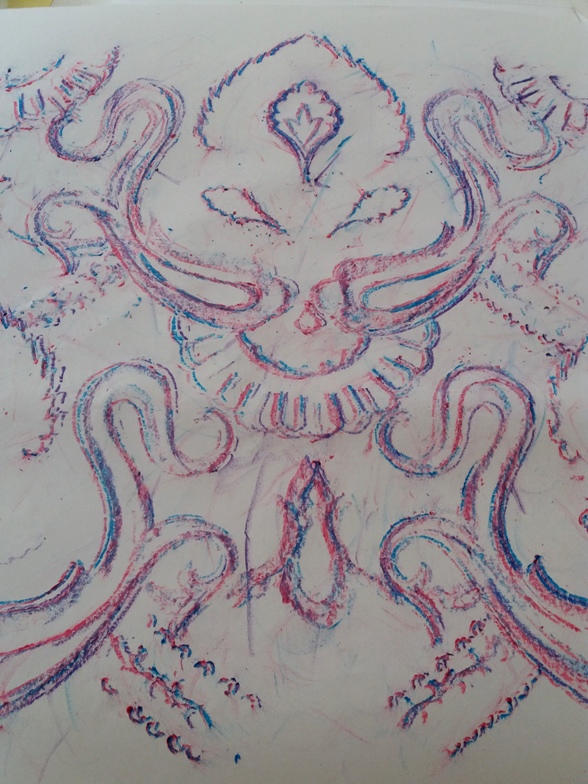 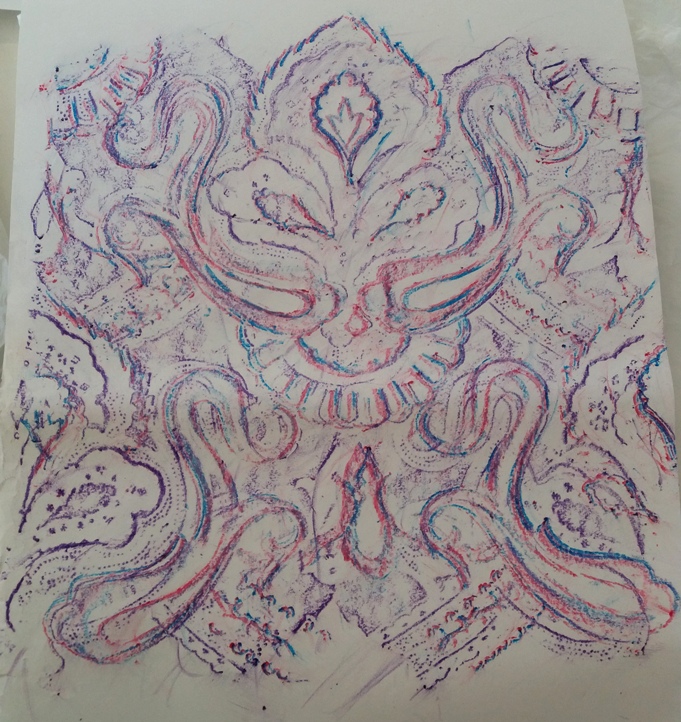 Then I found this one. 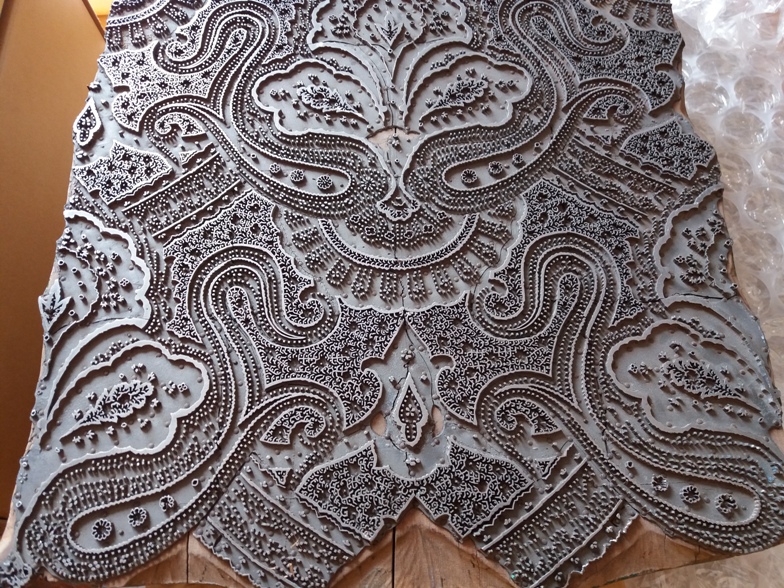 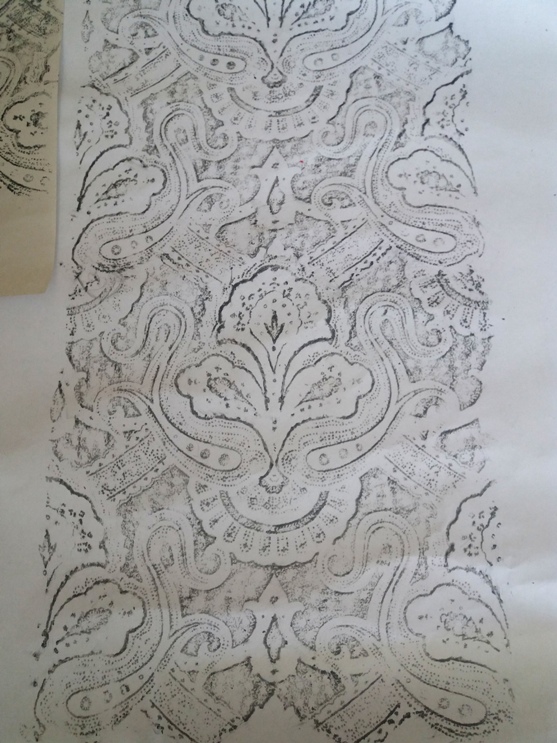 Gorgeous as all this is I’m not sure where I’m going with this currently, this is one to come back to. 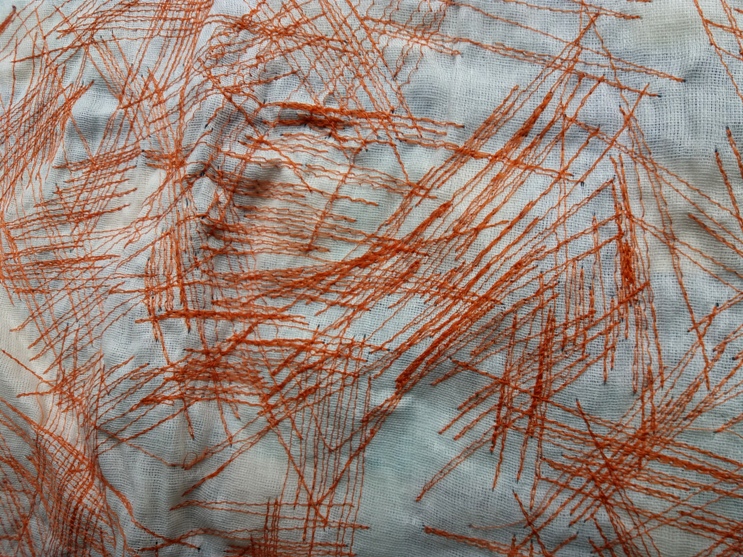 I’m off to start my artist in residence at Leeds Industrial Museum at Armley Mills today. I’m having to spread it over two weeks as I can’t afford a block away from the day job (Adelaide Walker). I have plans for the day, I wonder if it’ll actually work out that way? wish me luck!

I’ve been fascinated with feltmaking for over 15 years, I love teaching and sharing my skills and I hope that you’ll come along to a felt workshop and catch the bug.  So many things to make and all from the one material!

I have no workshops currently booked but I will be running a small number of workshops each year organised by me and held locally (West Yorkshire). To make sure you know about them I suggest you join my mailing list as that and Facebook will be the main method I’ll use to notify people that they’re happening.

In addition you can book me to deliver a workshop for:  your group e.g. guild or society,  your school e.g. secondary up to AS level and experience of teaching the teachers and for small groups of friends (max. 4) at my home studio or even at your home (numbers dependent upon space available). More information is available on my workshops page. 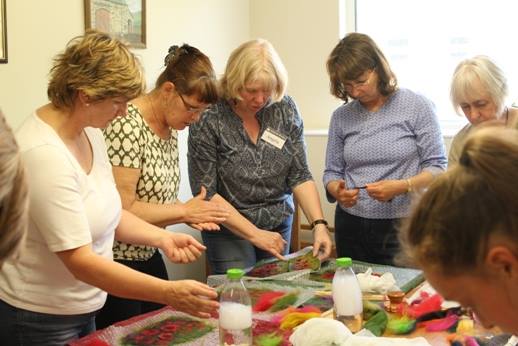 Remember when I went to Moorfield School in March? The hanging we made was inspired by Hundertwasser and another artist we contemplated was Picasso. When I left I gifted some white Merino and all the unused bits of wool and pre-felt to the school and I’m delighted to say that they went ahead and used them up.

Don’t you just love them? I think this second face was especially successful. Perhaps I should look out some of my scraps.

Puck loves to be with me and today she was desperate to be very close.

The only problem is the bit I need to work on next is now under her bottom and I don’t like disturbing her!

I love the effect of hand dyeing but I can’t honestly say that I really enjoy the process itself. It usually starts out all right but before I finish I find myself wishing I’d never begun. Today is different, this is all I’m doing and it’s been blessedly short in the doing.

The autumn orange colours are for a project I’ll tell you about in Autumn, I know, crazy huh? Me working so far in advance!

Wool Stories – The Felted Mill, is an exhibition by region 10 of the International Feltmakers Association inspired by Leeds Industrial Museum, Armley Mills. It opened in April and will be running until October 21st, if you can find the time to visit, do as it’s well worth it with work from twenty one felt makers on display. Below is a selection of work from the exhibition but not all of it, there’s so much more to see.

From a distance I saw an owl but closer up there is so much more to see. The owl is taken from the Leeds crest outside the museum, it has wings of cogs and is standing on A and M printing blocks which stands for Armley Mills. It has elements of printed film posters and is a Visual Wowl by Tracey Gaytor, isn’t it wonderful?

Window of Inspiration or Limitation is by Anthea Green, it incorporates a number of British wools and was influenced by the similarities between women working at the mill in it’s heyday and the work of women in Laos now.

Cogs in the water by Jane Gatenby is particularly apt as the mill is bounded on one side by the canal and on the other by the river as well as being formerly driven by water power.

Also inspired by the machinery is this beautiful work by Margaret Jackson containing nuno felting and stitch. The colours are so interesting on this piece.

Anne Corder was inspired by rust and rivets to make this jacket. The rivets are what really drew my attention, they have a pleasing rhythm to them that works well with the line of the jacket.

I love a bit of texture so this cog pot by Iris Brunton ticked my boxes. I love how the cuts both reveal the inner layers of wool and the inner pot to form the cog, really well done.

It was nice to see my own work mounted there too even though I couldn’t get a picture of these without my shadow and the lights reflecting off the glass. 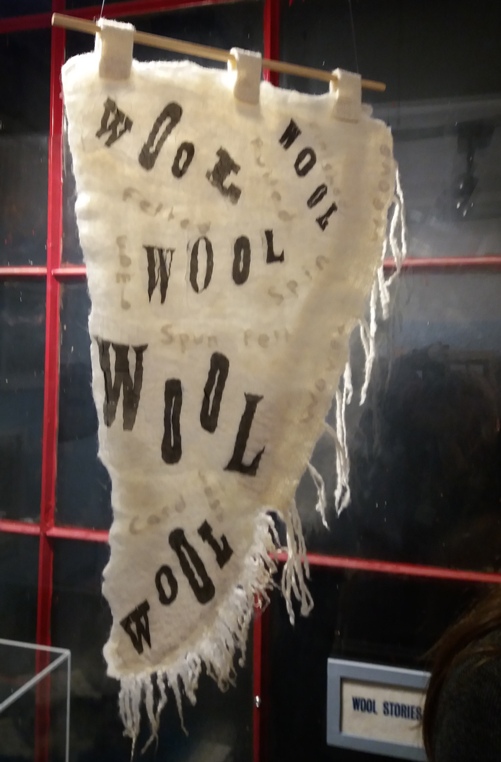 My thanks to the hanging committee for their inspired choice of hanging this piece of mine in front of a light source. It really helps to show up the embroidered words.

Inspired by all the books of fabric samples at Armley Mills, Jill Lauriston made a felt book and very ingeniously used an old shuttle for the spine.

I failed spectacularly to get a shot of the full 3 foot of  Linda Hume’s mill chimney but I’m pleased to show you the pictures of mill workers she incorporated which added such poignancy. The text was also printed at the mill using one of the printing exhibits.

This depiction of machinery by Helen Riddle is created using free hand motion sewing. It’s fascinating to watch Helen ‘draw’ with a sewing machine and I love this black and white pitcure, the only item in the show, besides mine, which is monochrome.

This is a page from Helen Riddle’s sketchbook and it stole my heart.

This nuno felted, dyed and printed jacket from Chloe Greenwood is fantastic. It’s called Hard Times and contains quotes from some of the former mill workers. Check out the buttons.

I hope this has whetted your appetite to go see the whole show. A perfect time to go would be on Saturday 2nd June when the Leeds Wool Festival is on.