It was a bright clear day, it was early and we didn’t need to wait for our teenager to emerge, the day was ours. We shot across to Bempton Cliffs as quickly as we could and were mildly surprised at the numbers of people who’d beaten us there!

We go every year to see the sea birds nesting. There are thousands of gannets and kittiwakes not to mention guillemots and razorbills plus some puffins, fulmars and even a few tree sparrows around. The kittiwakes were the only ones we saw with eggs in their nests. I didn’t take photos (no camera) but spent my whole time just watching and abosrbing the sounds.

Walking beyond the sea bird colony viewing areas we continued along the cliff and I was struck by just how much red campion was in bloom.

I used the camera on my phone to take these pictures, even though I couldn’t see what I was taking thanks to the sun on the screen. Isn’t it wonderful.

Our next stop was only a few miles away at Filey where we planned to take a beach walk out to Filey Brigg and also indulge in a fish and chip lunch. You can imagine how delighted I was to discover large areas of rust on our beach walk.

just loved all the circle patterns on this one.

I took so many images.

The majority of these photos were taken portrait style but when editing I found I preferred many of them landscape.

Did I mention I took a lot of photos?

The last set of felt work I did focussed on the tree of life and my next set is going to focus on rust. I love rust, can you tell?

I’ve already begun some dyeing experiments using rust and I’ll show you those in a later post. After Filey we stopped off at Nunnington Hall on our way home and saw these splendid chaps in the gardens.

They were of course very noisy, they always are aren’t they. 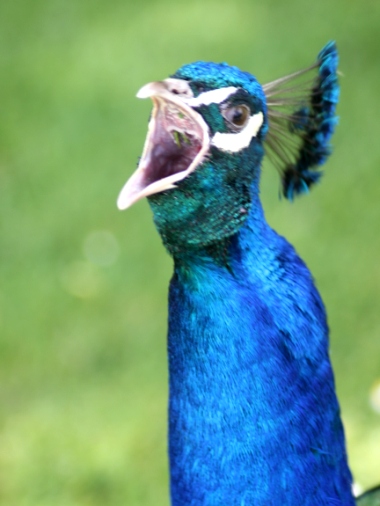 No females around so no displays 🙁

Tempted to make my next work all about peacocks but looking at the evidence above, I’d better stick with rust.

It’s some years since we visited Bempton Cliffs in North Yorkshire and we had a fabulous day there yesterday. The sun shone, the birds cried and wheeled in the sky, we saw puffins and had a paddle down on the beach in Filey. As we walked along the cliffs I spotted a most unusual sight.

I claim the prize for the most caterpillars in one spot. Does anyone know what they are? Apart from this I was inspired by the colours of the sea as I viewed the rocks beneath it.

The picture doesn’t do it justice really but it’s the best I managed and it has framed a gannet in flight. Gannets have to be my favourite seabirds. So elegant.

P.S. A look in our butterfly identification book (yes a book not the internet) suggests they’ll become peacock butterflies.