In my stash was a damaged vintage silk scarf which I thought it was time to use. I laid it onto a background of white Blue Faced Leicester wool and felted it to make a book cover. 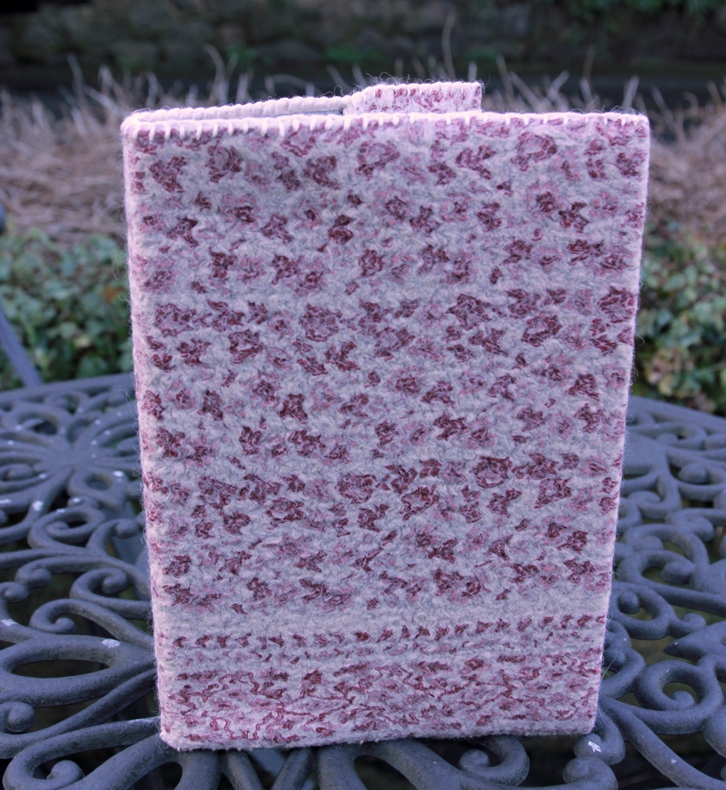 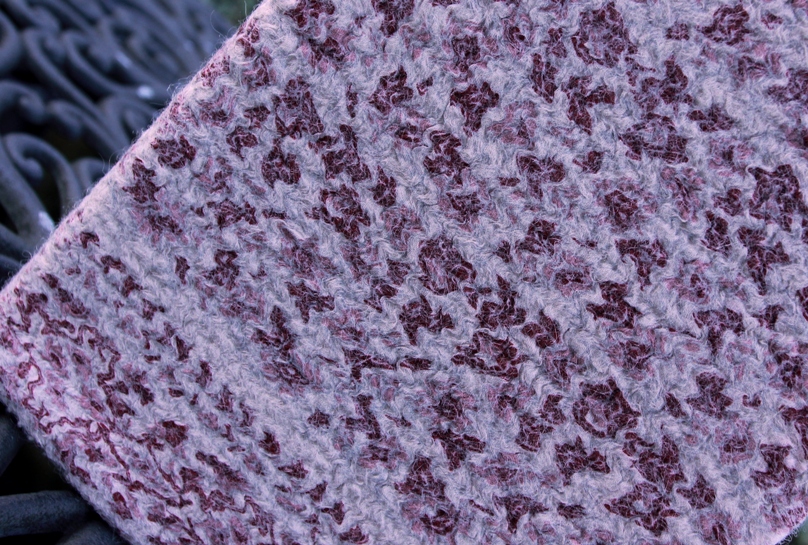 It worked out even better than I had hoped and will shortly make it’s way into Out of the Ordinary in Skipton. 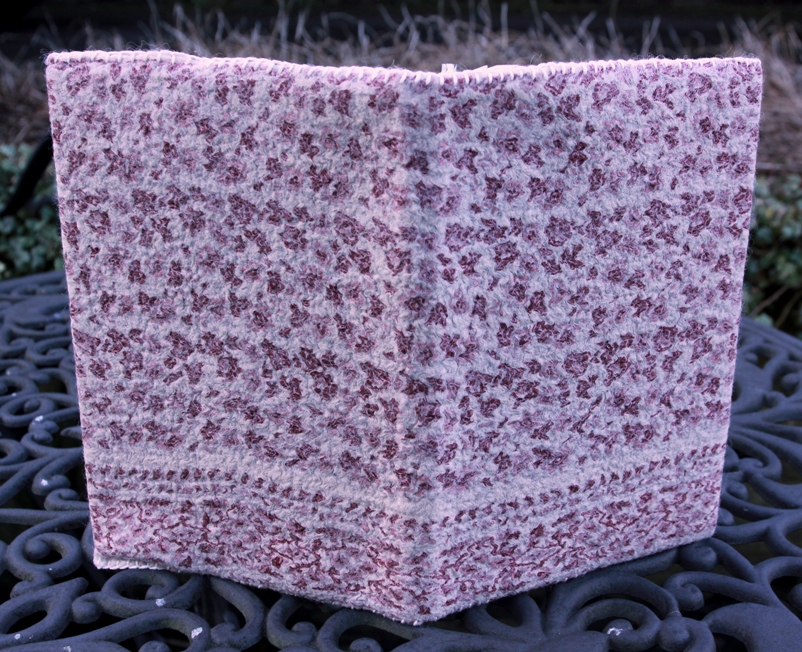 I’ve really been enjoying the whitework I’ve been creating and it’s all thanks to being a member of Metaphor Textile Group. Whilst teaching a felt making session I started this book cover as an example. People often get stuck for ideas or fazed by being asked to design and so this was partly to show how to make the cover and partly to show how focussing on one thing can be liberating and yet work very well as a design.

Working on a white base I added circles (always my go to shape for simplification) of fabric in different shades of white. There is cotton scrim, silk and crystal organza. 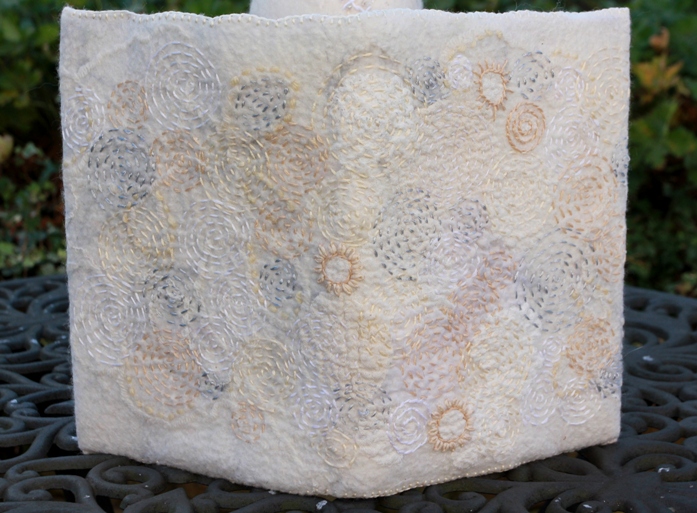 After felting I’ve continued with the circlular theme by stitching mainly spirals into the felt. They overlap and again are in shades of white and cream with a metallic silver thread added in for a little extra interest. The photos don’t show the fabrics very well but if you look to the left in the photo below you’ll see the scrim in white and cream. 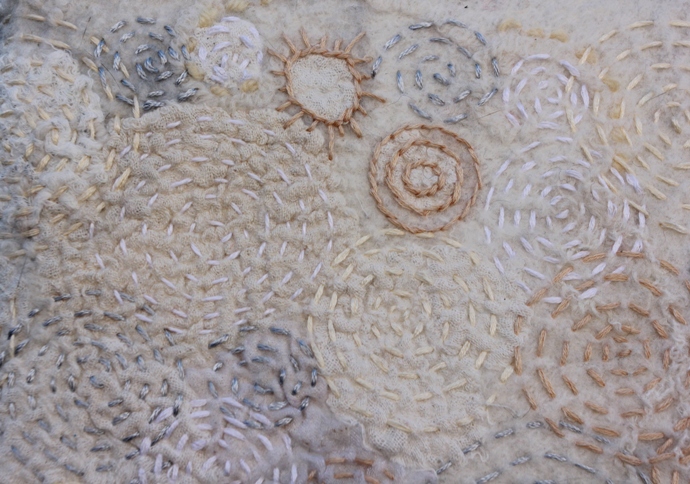 Adding fabric to your felt adds texture (yum) and adding stitch adds even more texture. In this case more is definitely more with the stitching and feels pleasingly textured to the hand. 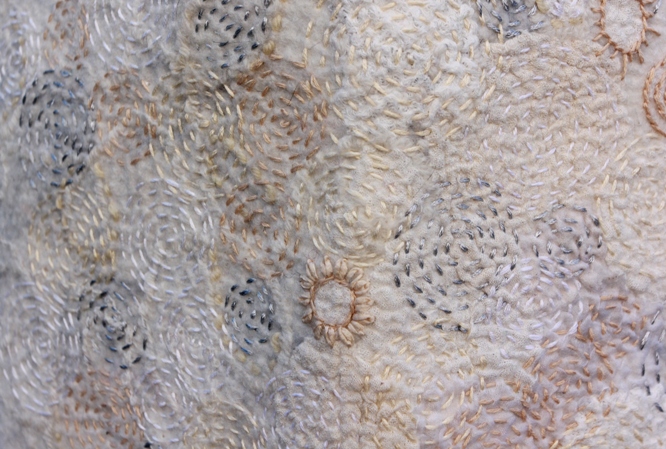 This is just one of my items which will be on sale at Trawden Artist and Makers exhibition and open studio event on 21/22 October.

There are some things which you really really enjoy making and this book cover was one of them. Inspiration came from a magazine cover.

I began by stitching into some crystal organza to create a tree shape. The thread used was wool yarn and I used a split stitch.

The little twinkles in the shot above are not water droplets but small pieces of glitter on the fabric. I laid out two layers of Blue Faced Leicester wool, placed the fabric on top and then felted it together. 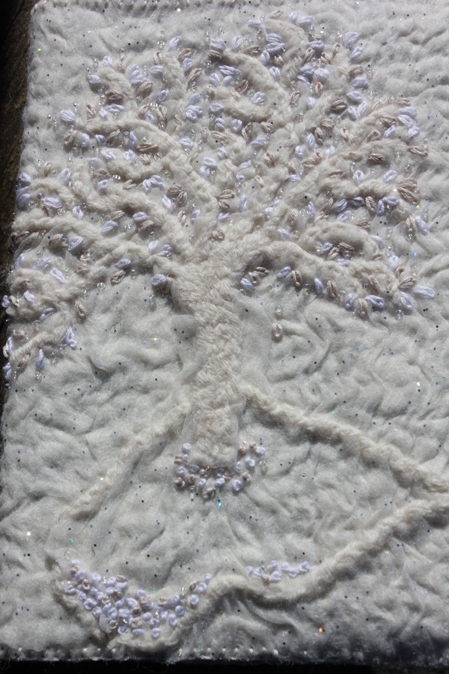 To embellish I chose a simple lazy daisy stitch in cream and white embroidery thread. 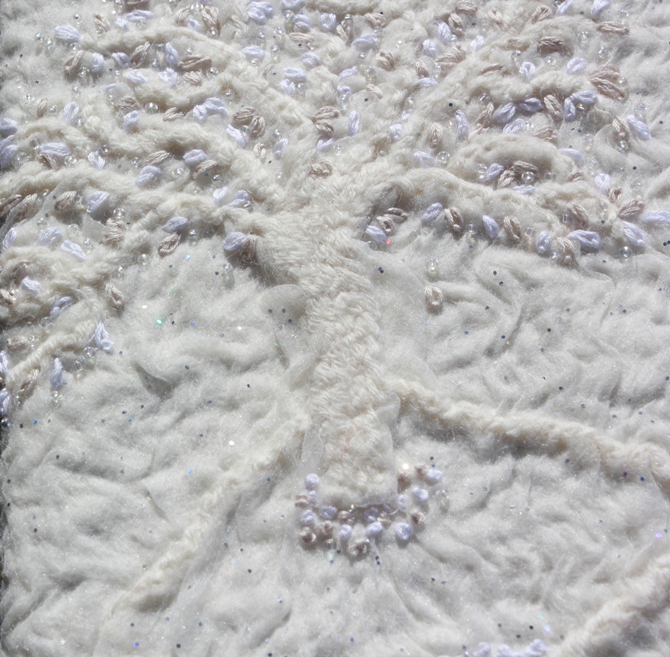 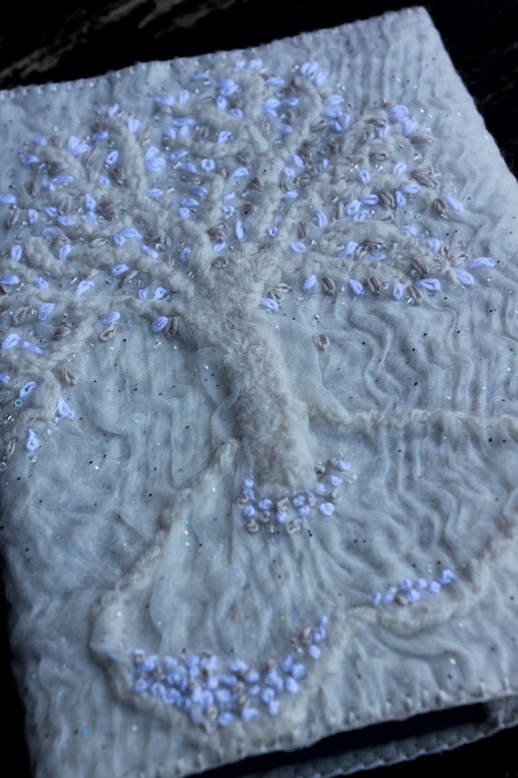 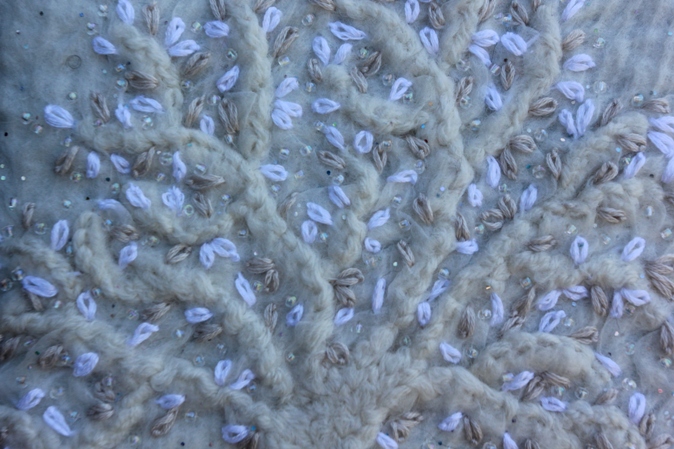 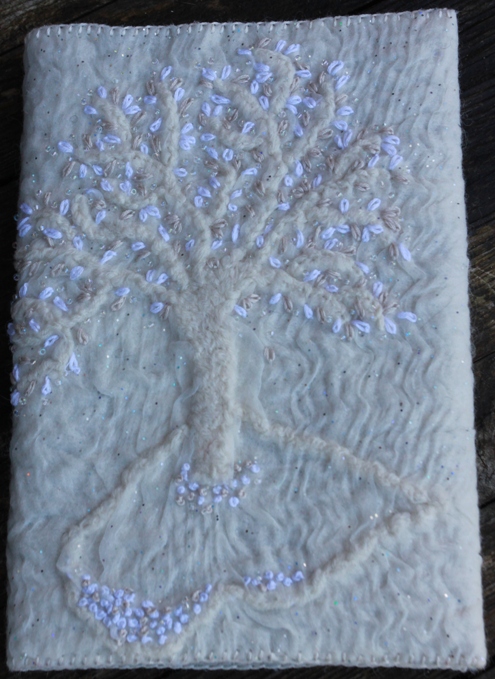 I love using crystal organza as it adds so much texture to the finished felt and using white on white wool means you only see the texture and twinkle added, it hasn’t obscured anything. It’s amazing what a diference even simple stitch can make to the finish.

If you feel inspired to make your own book cover why not come along to my workshop on Thursday 27th April, it’s one of my favourite workshops to teach and a fun one to experience. You really don’t need to be brilliant at sewing as even running stitch is really effective when combined with the nuno felt.

In April I’ll be running a British wool book cover workshop. This example was created using a mixture of Cheviot, Shetland and Wensleydale wools.

I enjoy putting a few stitches into the wool at the prefelt stage. As I reached the pre felt stage I stopped and put in a running stitch where I wanted to site the main tree branches and then wrapped those stitches with a mixture of threads in brown, grey, black and amber after which I continued the felting process.

After felting the leaves were inserted on the tree with a mixture of coloured threads in french knots and simple bird silhouettes added to the sky for additional interest.

It’s edged with blanket stitch in brown and white embroidery threads. The same technique can be used for pictures as well as book covers. To come along and create your own unique piece of wool see further details and booking here.

Firstly, a big thank you for all your good wishes about my Mum, I’m pleased to report that she is out of hospital and recovering well.

It’s a couple of weeks ago since the book cover workshop but I wanted to share these photos with you. First up is Hannahs book.

Lots of stitch and cyrstal organza on the front giving texture.

I particularly like the adition of some Lime Merino into the background creating spots of light.

I struggled to get a good photos of Bev’s red book cover but it’s full of lovely textures created by adding, ribbon, organza, lace and an old scarf.

The texture really is beautiful.

Sue was after a textured tartan effect.

The texture in this shot is created by the addition of organza. As it’s a synthetic fabric you get larger textures than if it had been a silk organza.

It’s a shame that the red thread doesn’t show up very well in the photos as it was very effective.

Heather positioned this piece of an old scarf very carefully so that it would appear on the spine of the book. It’s more texture and really finishes the cover off beautifully.

You’ve all loved poppies so much this last year that I felt inspired to transcribe them onto a book cover. Lots of lovely carded green Merino for the background, then some fabric to give a little texture. 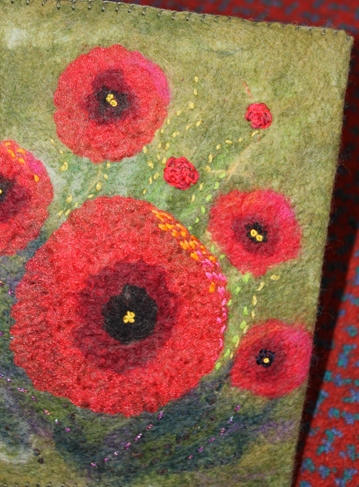 You can see some of the texture in this shot. I added a lot of the background stitch at the pre-felt stage. 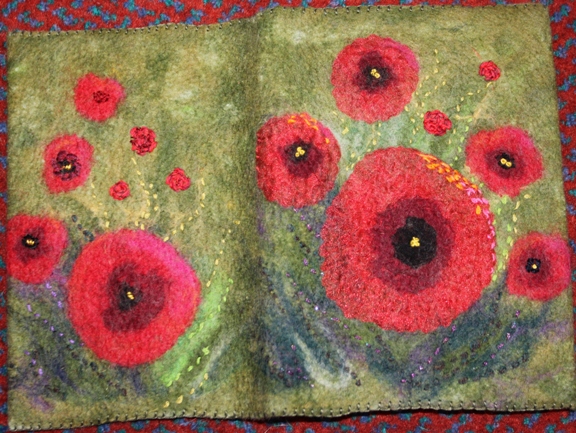 Of course I’ve decorated the back too but I try to keep it lower profile so that it doesn’t affect the user when they write in the book. 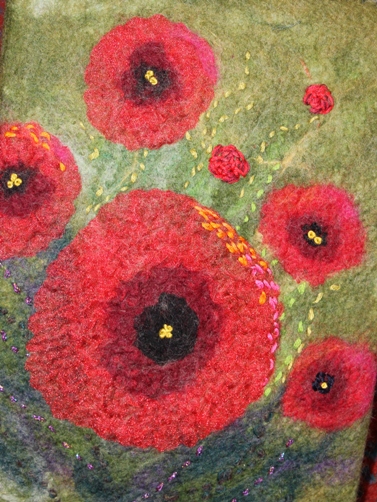 The large poppy has red crystal organza for the petals and black silk chiffon for the centre. Chartreuse centre stitch added at the end using french knots. 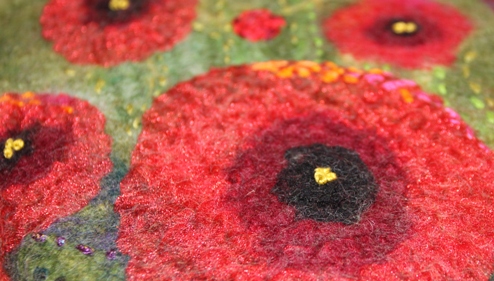 Spaces on Fridays workshop if you feel inspired to come and make one of your own.

I received a book cover commission from a very lovely lady this week. A real book enthusiast who wanted a special cover for her inventory book and who loved a design she’d seen in my shop. My brief being to make it darker and more stormy if possible, I set to.

I laid out two layers of BFL and then a final carded layer of BFL and Merino.

Next, I added the snow using wool nepps.  It’s important to put the snow on before the tree so that you don’t end up with blank spaces round it later or snow in a line down the trunk. I wet the background fibres before adding the tree so that I could position exactly where I wanted it and without it being disturbed later. 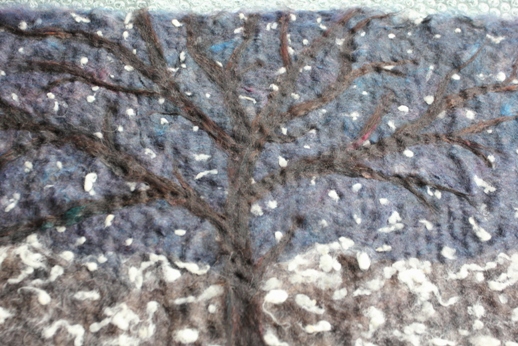 More snow laid on the bottom third – well it was settling! 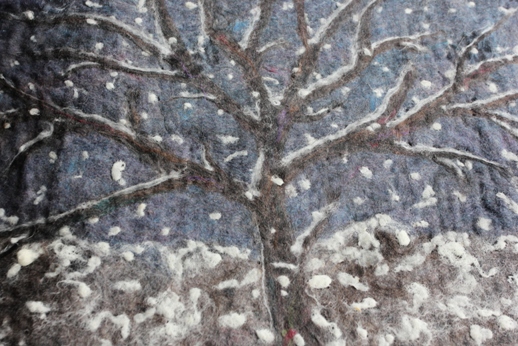 Laying fibres along the top of the branches not only represents settling snow but brings the tree to life. In addition to white fibres I also laid a little crab fibre for that added shine. I suppose you’d like to see the finished version now. 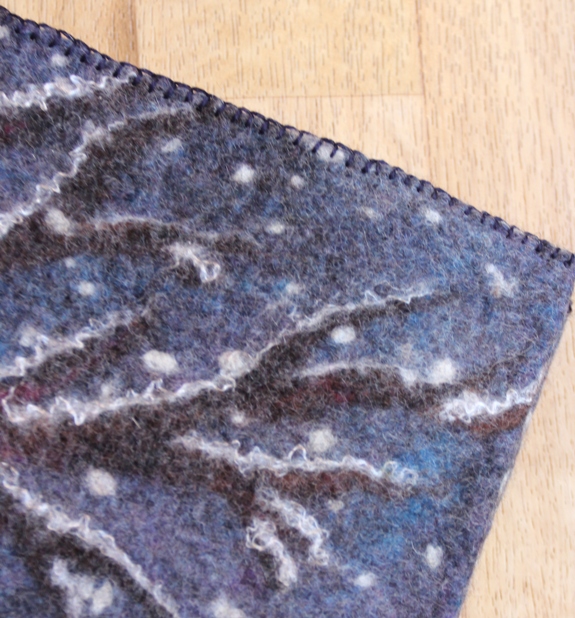 The edges are blanlet stitched in navy blue embroidery thread. 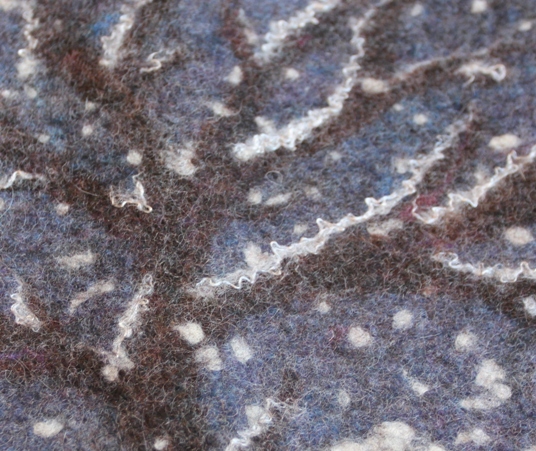 You can see how the crab fibres have been forced to wiggle as the wool felted down. 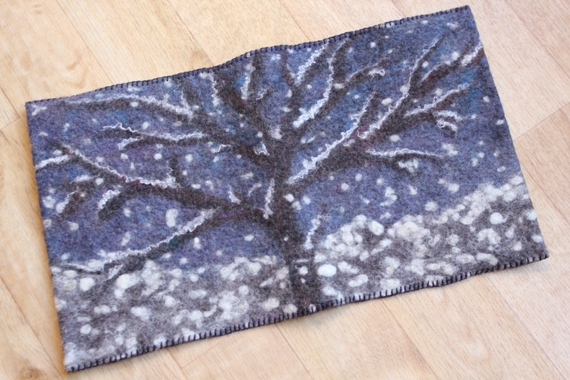 I love the darkness of the sky and am wondering whether I should have made the foreground darker too. The photos may not show it but the sky has some datk purples and greys mixed in there and the tree is actually a mixture of black, dark browns and dark greens. 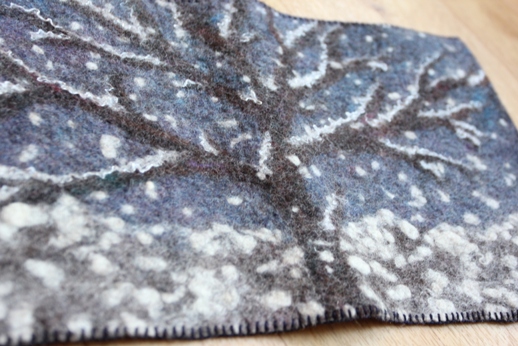 This is a special size book cover so I just hope I’ve got the dimensions right and as it’s already in the post I should know soon.

If you fancy making your own book cover why not come along next Friday 14th February to the book cover workshop here in Ilkley. There’s still a couple of places – book now.

I led a workshop last month for the York Feltmakers group looking at incorporating stitch with felt making. Not all my photos turned out but I’ve chosen sections from some of the ones that did and
I think they look stunning.

You can see various fabrics, threads and stitches in each.

They make for very rich pieces of felt.

It was a very relaxed and enjoyable workshop.

I’ve said it before and I’ll say it again, it’s one of my favourite workshops. We began by stitching into the fabrics before laying out the fibres, then stopped and stitched at the pre-felt stage and then there’s opportunity to add as much stitching , beading etc. as you like after felting. Instead of the usual photos of the finished items I thought I’d show you a few details so you can see how much the stitch can become part of, and add to, the background.

This first piece is by Mich with crystal organza, stitched wool thread at the beginning and extra stitching just being added at the end. The purple and green stitched added early on have submerged into the background.

This lovely colour combination is by Marina and has three different fabrics each adding it’s own variant of texture plus stitching in wool, metallic and other threads

This highly decorated piece is by Pam and again there’s three different fabrics two of which have been highlighted. Stitching in embroidery cottons, metallics, wool and mohair threads.Adding stitch before and at the part way stage allows you to add details which become part of the piece rather than sitting on top of it. I think it’s rather lovely the way it works.

Just two fabrics on this piece by Ruth but used very effectively and adorned with stitch in wool. metallic and embroidery cottons. Additional texture was created through the use of Teeswater curls. I’d happily have kept all or any of the felts but they insisted on taking them home. However, Marina has been kind enough to send a shot of her finished book cover – isn’t it lovely.

My intention for the book cover below was to have more dark areas to really show off the throwsters silk waste providing the light areas. Too heavy handed on the silk was I, now what can I do with it?

The silk provides a fab lustre but the book, for me,  is too plain overall. I haven’t been able to find any beads that look right on the front so I’m hoping perhaps you’ll have ideas.