The results from the Ilkley Flower Show are in and everyone’s a winner! Hubby won a first with his winter scene photo and our daughter won the ‘something red’ class beating all the adults.

Not only did she win her class she won the Calder Plate for the best photo / painting in the show. Not bad for a twelve year old. Hubby managed a third on something red and I was nowhere to be seen. But, I did win a first for my cushion in the ‘something new from something old’ class which means I also won the Inspiration Cup. Two lots of silver in the family. As I only finished the cushion on Thursday this is the first time you’ll have seen the photos.

Everything except the yarn covering the seams was recycled. Hubby won second with his bird box and I won second with my cheese scones. Our daughter won a second for her CD cover, third for ‘my best friend’ photo, model from waste material’ and decorated biscuits. What a day. So despite the upset with the cake we came away very pleased and good humour was definitely restored. I think we may have a go next year too.

Today is the Ilkley Flower Show. Hubby had entered the class for lemon drizzle cake, came home and baked the cake last night. Not sure why, but it wouldn’t rise and turned out a lemon drizzle pancake. never mind, plenty of time for another go this morning. So at 7am it was off to the shop for some extra caster sugar and this time it all went right. He got the paper really smooth inside the tin, it rose and browned beautifully and smelt really gorgeous. It was carefully stowed in a tin for transportation and loaded into the car along with all our other entries.

Then, I noticed it perched on the back seat where a tap of the brakes would send it hurtling to the floor and advised we move it. Why oh why didn’t I keep quiet. We moved it alright, the lid came off, it came straight out of the tin and into mid air where my husband deftly caught it but in doing so put his thumb in it. Ruined! No chance of entering it now and looking at the other entries I reckon he was in with a good chance.

Today is his birthday as well so it’s not a good start to the day. I’m off to get the sackcloth and ashes but I don’t know how to make it up to him and restore his smile. We’ve still got all the drama ofthe other entries to worry about as well. Lots of good competition, my stomach gets butterflies just thinking about the judging and I can’t wait until we know the results.

Our daughter has participated in the flower show before and has even won a cup in the children’s entries but my husband and I have been onlookers, until now. We’ve decided this year that we should all be involved this coming Saturday and have chosen a few classes each. The first is an adult class for photography. Hubby and I have entered the ‘winter scene’ class.

These two were taken by my husband and below is my entry taken early one morning.. He’s threatening not to speak to me if I win.

The next category we’ve entered is ‘something red’ and this time the whole family is head to head. First up are my husband’s entries.

The insect on the flower was taken by my daughter and as I just happened to have some hanging around, I took the one of the bunting. I wonder who will win and will we still be speaking. I don’t think mine will win but at least it’s a different subject. Our daughter has also entered a children’s photography class with a picture of her best friend. 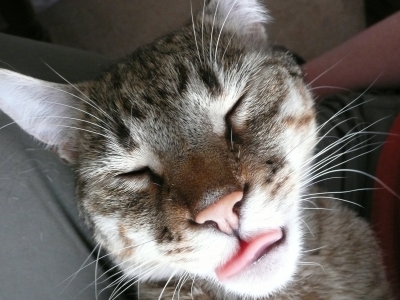 This is our youngest cat Pan and the one she adores the most. You should see them cuddled up in bed together watching a DVD – sweet. Pan is the most amenable cat ever, he never minds what you do to him and is just as happy to be upside down as curled up asleep with his brother.

Our final marital head to head category is ‘something new from something old’. A few weeks ago my husband had to build a new fence panel and salvaged the timber from the old one which he has now turned into a striking aysmetrical bird box. In my usual way, I decided to use this opportunity to do a project that’s been in my head for some years and which hadn’t even got started yet and that was to make a cushion. It’s going to be made from parts of jeans which belonged to my daughter and which were trashed beyond the point of being able to be passed on.

I’m sure you’ve all spotted the problem with mine – it’s not finished yet. I’ve one last seam to cover with yarn and then I can begin to make it up. At least putting it in the flower show means it will get finished. I am worried as I know that the judge will be from the WI and will spot all my little mistakes which my daughter won’t notice and wouldn’t care about if she did. Yes, of course this is for my daughter – again.

These aren’t the only categories we’ve entered. My husband has entered the lemon drizzle cake class and I’ve committed to making cheese scones. We think our lemon drizzle recipe is a winner but if you have an award winning recipe for cheese scones now would be a good time to share it with me!

I’ll tell you more about the other categories later – wish us luck.