I’m so pleased to be able to show you the finished peacock at last. It’s such a shame really as 80% of the work was done in the first two weeks but life has been so terribly busy that it’s taken weeks longer to complete the last 20%.

How do I feel about it? I’m thrilled, it’s worked out very well, not perfect but I so enjoyed the making of it that I don’t mind. After all, it is going to a good home too, our daughter Charlotte’s new digs at uni. 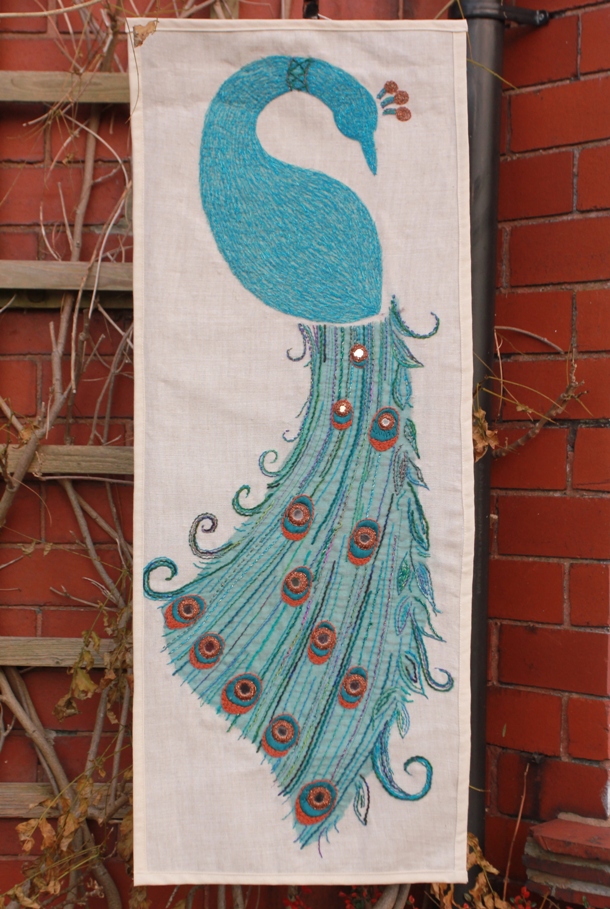 Quite a modern interpretation. It was tempting to try and depict it accurately so I began by searching peacock images on the the internet and made my choices from there. 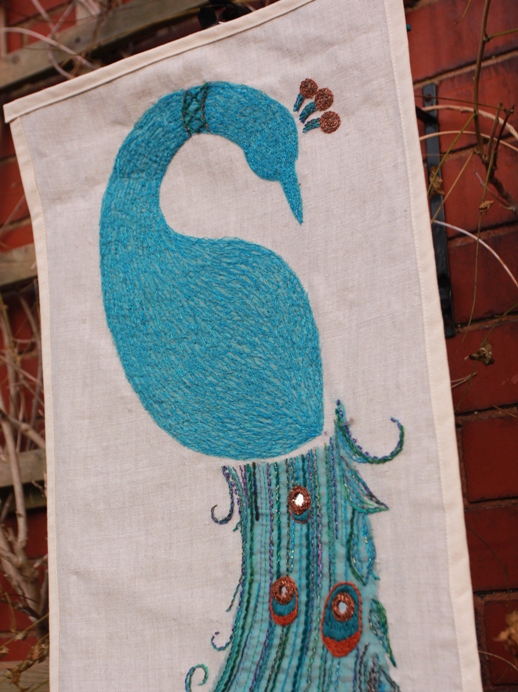 The simplicity of the head and body is a good contrast with the rather much busier tail. I began by fusing crystal organza shapes onto the linen background. For the body I free machined over it working down in the direction that feathers would lay and then went over the whole thing again with holographic thread for the shine. That nearly finished me off! It certainly finished my machine off which refused to sew anything afterwards and is why I chose to hand stitch the tail. 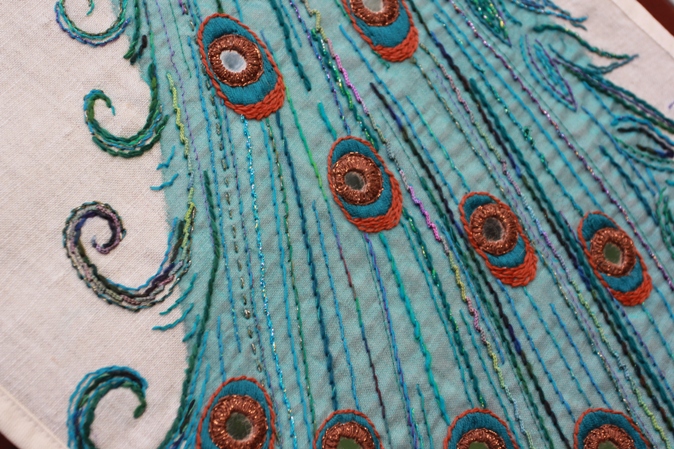 The only time previously that I’ve used shisha mirrors they came with the cotton surround already done. As I couldn’t find the sizes and colour I needed I had to learn to stitch around them myself. It’s not difficult, which was just as well as I decided to use a thread with metallic elements and they can be painful enough to use. 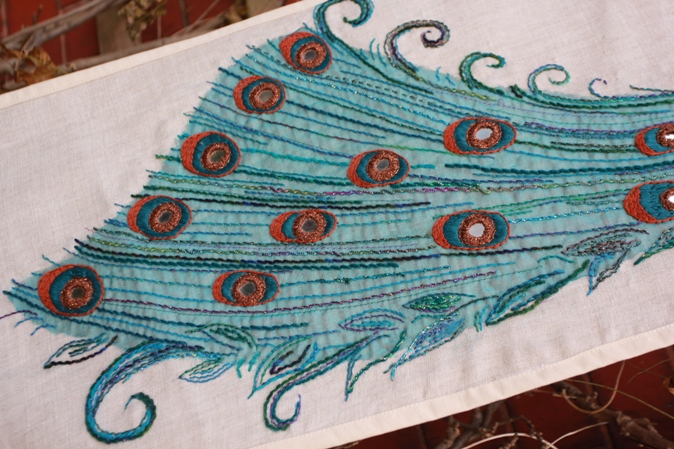 Using the fabric background made the tail look rather blocky but bringing the feathers off and breaking the outline worked well. I had intended to put more feather detailing around the shisha mirrors but decided to leave as is and looking at it now that was the right decision. Hand stitching the tail gave me great pleasure and I’m so pleased with it I might have to do more work without felt!

I’m back! The shows are over for this year and I can now think about doing something other than packing wool, like using it maybe? (happy dance) Before the show madness overtook me I managed to get the peacock hanging quite a long way, so far in fact that a further 20 minutes worth of work would have seen it finished. 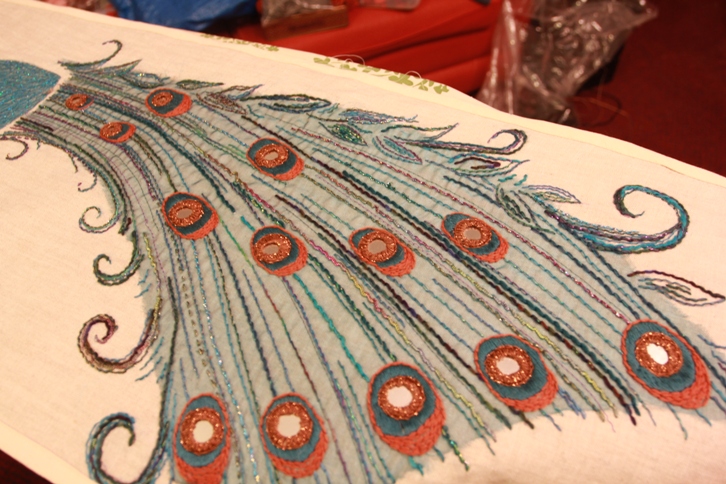 I’ve backed and bordered the hanging with calico. I’d literally just finished machine stitching it down when a section popped out. It’s hard to explain how deflated I felt, so close and yet so far now to finishing. There’s so much going on that it’ll probably be another two weeks before I complete it and yet the majority of the work only took 2 weeks. Wish me luck 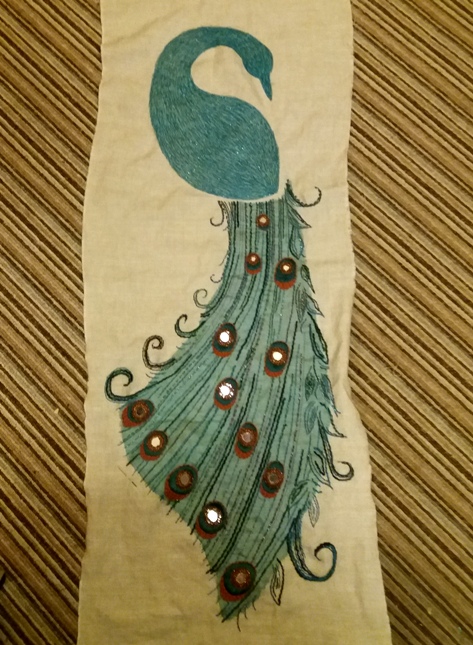 Definitely progress. I had intended to do more work around the shisha mirrors but I looked at it last night and decided that actually the tail is done.

Still not completed by the way and still loving it.

Just popping by with a quick update on the peacock hanging and I thought you might like to see the box of threads I’m using for the tail.

So sparkly. The body of the peacock is turquoise and I’ve chosen turquoise, green, purple and copper for the tail in as many shades as I’ve got, including a wool thread I’ve just dyed for it, many have sparkle but not all. 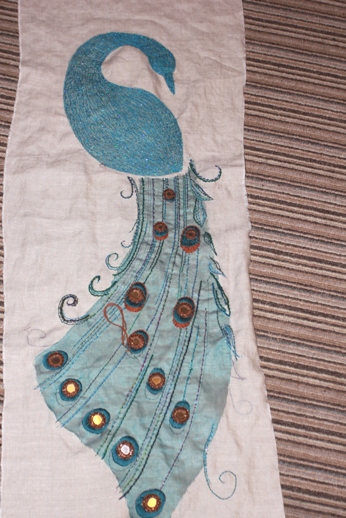 All thirteen shisha mirrors are now on and you can see I’ve begun to bring the stitching off the fabric tail. Progress is being made although now I look at this picture I can see how much I’ve still got left to do. Still loving it.

Last year at uni our daughter Charlotte had a window in the door to her room and as the hall light switched on and off with various comings and goings the light distrubed her. My solution was to make her a small hanging made of felt with prints of elephants and shisha mirrors to catch the light and we attached it by means of double sided sticky tape. It was appreciated and did the job. (I cannot find a picture of this but I’ll ask her to take one)

This year she’s sharing digs and the landlord won’t allow anything to be attached to the wall, not even with blue tack. We found a solution for her pictures, a piece of 6′ x 3′ grid garden trellis onto which she can stick whatever she likes. On the wall at the top of the stairs there’s the head of a screw sticking out and they’ve decided they’d like to hang something there,. As they all like Charlotte’s hanging from last year I’ve been requested to make sonething for this space, the only stipulation being shisha mirrors.

Within two minutes the idea of a peacock had popped into my head and also the idea that I should use some of that lovely linen gifted to me by Rosie (thanks Rosie), no felt involved! Perhaps I’m not feeling well?

Work began immediately with me researching styles of peacock designs on the internet and I soon had an idea. 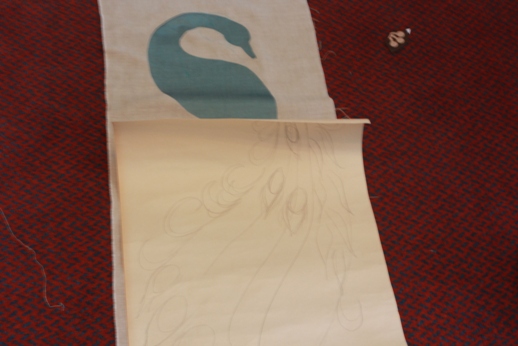 As you can see I’ve already got the body of the peacock on and I’m trying to work out the tail. I envisaged lots of machine stitching with this project which would be quick and lots of sparkle to enliven a gloomy hallway.

After attaching the body I decided the next step was to free machine stitch all over to keep it secured and add texture and sparkle. It was such hard work but I did eventually manage to get the body done then I switched to holographic thread to go over it again for the shine. I didn’t need to cover every inch as the fabric (crystal organza) provides the shape. The holographic thread was a nightmare and with some bad language, quite a bit actually, I did finish the task.

Next up was to do some stitching down the tail along the line of where feathers would lay. My machine had other ideas, it had absolutely had enough and wouldn’t sew anything. I cleaned the machine, I changed tension, threads and needles, it wasn’t having it. So I’m hand sewing the tail which means this project is now a longer job than I’d intended but it will mean lots of variation and texture in the tail.

The fabric for the tail makes it a bit blocky at this stage but the intention is to break the outline with stitch on all sides which will have the effect of softening it. The fabric background also means I don’t need to sticth every inch of it. 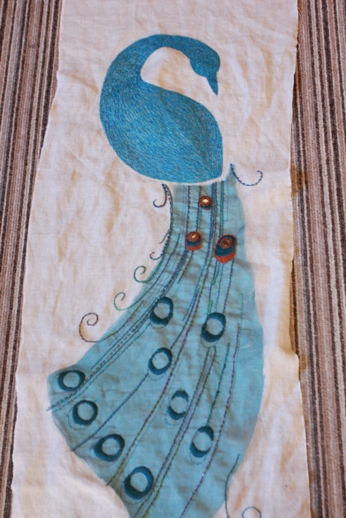 The first three shisha mirrors are completed and backgrounds sewn for ten more, thank goodness for the internet as I couldn’t buy any mirrors locally. I’d originally hoped to have this completed by the 14th of October (such niavety!) but that’s definitely not going to happen, not least because I’ve had to learn how to stitch shisha mirrors on from scratch which I’ve never done before. All this hand stitching takes time but I am loving doing it even though there’s no felt involved.