I woke up in such a good mood this morning, I’ve been looking forward to today all week as I had 3 friends coming round for a crafty get together. It took us a little while to get round to the crafting element as the cake sampling was a priority. No photos to show you as Jeni’s orange cake was so delicious we’ve eaten it all (with help from Hubby, Daughter and her friend)

So much fun. so much laughing and lunch in the sun, what could be better? I’ve even managed six pre-felts for a couple of projects I’m working on.

Thank you Jeni, Heather and Sue, I’ve had a wonderful day and am looking forward to our next get together.

I don’t know about you but when there’s a lot of other things going on in life I find it difficult to be creating felt. It’s as though there just isn’t room or focus for me to design. However I can manage to do mechanical things, so when I checked my fibres after the last workshop I decided something needed to be done.

Some fibres were past their best and I had lots of cut bits of soya, silk and ramie fibres so i decided to make pre-felt.

There’s dark brown with the cut fibres (plans forming for using this one), a mid brown with pieces of BFL roving and a purple and lilac one in the foreground. These will all be added to my pre=felt stash which I have to say, is unexpectedly getting rather low. Funny how even making something this simple is so satisfying.

Pre-felt is, as it sounds, a piece of felt that hasn’t been fully felted but remains soft and can usually be cut up and put into further felting. Occasionally, if you’ve felted the wool a little too far it can be difficult to get the pre-felt to stick without stitching or needle felting it on. But if your pre-felt looks like this

You can see most of the fibres have already locked down and a skin has been formed.  Using either a hand carder or dog brush just brush the fibres on the back of the pre-felt until they’re all fluffy.

Your pre-felt will then adhere to further felting without the need for stitching.

This was the subject of my workshop last Thursday. Firstly an explanation for you non or new felters. Pre-felt is part made felt where you stop working at an early stage and the felt is still very soft which enables it to be cut up and re-used. Wool paper is made in the same way as silk paper but using wool fibres. It’s quite a simple process and I’ll put up a tutorial very soon.

The two examples above show work with pre-felts using a mosiac (sometimes called inlay) technique. In the green and yellow example a shape has been cut from each piece and swopped over. After stitching together with wool yarn to become part of the pattern it has then been felted into one piece of fabric. The colourful example is many pieces stitched together to form a picture also with stitching that has become part of the piece. It is possible to do invisible stitches but unfortunately I don’t have a picture of the one that Judith made. Working this way gives crisp edges to work, clear colours (no background fibres coming through) and allows the felt to remain an even thickness.

The examples above show the pre-felts cut up and laid on top of other pre-felts to create pictures (onlay technique). Again, you retain great control of shapes but where you place the pre-felts you’re actually building up the layers of fibre and making the felt thicker in that one area. You can see the extra thickness best perhaps on the red flower in the bottom left hand corner.

Wool papers are used in the same way as pre-felts, by cutting up and placing onto other fibres or pre-felts. As you add the soapy water the paste is dissolved and the fibres felt together. One advantage it does have is that you can make the wool paper much finer than a pre-felt and still get a crisp edge to shapes whilst allowing colours beneath to show through a lot. The examples above have both pre-felts and wool papers on them.

The workshop with Rutsuko Sakata was very interesting and I’ve made two nuno (fabric and felt) scarves using her techniques. Rutsuko had brought samples of her work for us to look at, touch and examine. Obviously we were full of questions about how various effects were achieved. After a brief demonstration of how to lay out fibres (more of this in a minute) and a chat about how to achieve different effects, our task was to create our own sample scarf using as many of the techniques and effects as we could.

In addition to working with Rutsuko’s techniques I’d challenged myself to work in naturals just because I rarely do so. I had gone armed with, a natural grey and a 100s superfine white Merino and bits of yarn, ramie and spare fabric. The first difference of the day was the availability of silk organza as the fabric for the scarf. I had taken silk chiffon but thought I’d give the fabric from Rutsuko a go. the silk organza has more body than the silk chiffon and is Rutsuko’s fabric of choice.

Step one was to make some pre-felt to cut up and use in the sample scarf. I normally use the width of my hand to pull the fibres from the tops and then lay two layers of fibre, the first horizontal the second vertical. We were advised to lay out two layers of diagonal fibres. No wet and set stage but a small number of rolls increasing in quantity and pressure until we have a pre-felt. Now I don’t make the softest pre-felt (part made felt) in the world but even I was surprised at what Rutsuko considered a pre-felt. We rolled until there was no movement left in the fibres, a stage so late that some people would actually have finished felting at this point!

Then we began to lay out the scarf. All around the edge we put two diagonal layers of fibres then laid on our designs using our pre-felts, yarns etc. We were all very keen to make a flower using Rutsuko’s technique and as usual I had a yarn that I didn’t know the composition of and decided to experiment with it anyway. You perhaps can’t tell from the photo but it was quite hairy which is the main reason I wouldn’t use it again. It only stuck where I used a few fibres to attach it so that tells me it wasn’t pure wool either. I still really like this scarf and it is wearable. I love the natural grey merino which felted quickly.

We rolled and rolled and rolled until there was no movement in the fibres at all and it was even beginning to shrink a little. Then we heated it up and rolled it just in our towels. This fulling (hardening) process made it shrink quite quickly as we continued to add hot water (or dip into hot water) between each set of rolls. Things really got wet at this point, it’s a process that could easily be done on the draining board at home so at least all that water would have somewhere to go. Only after all this was finished was it time to cut the flower and shape the petals. The flower and the leaf lattice at the other end are my favourite parts of this scarf. 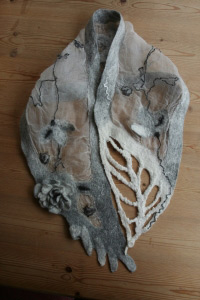 When it was time to make a scarf on day two I knew I wanted two flowers, some lattice work and to add more texture but I also decided just to work in white and on silk chiffon this time.

Along the edges I added Ramie fibres and curly kid Mohair. In the centre are some plastic rings wrapped with lambswool yarn and trapped under scrim with a little fancy yarn on top. The lattice is made from strips of fibre but twisted a few times. I wouldn’t normally twist the fibres but you can’t tell from the finished item that I have.

Could I have made this scarf using my usual techniques? – yes. I don’t think I learnt a huge amount on adding effects and finishes to my scarves but the techniques used to achieve them were new and interesting. I would adopt some of the techniques in some instances and I really enjoyed working with someone from a different culture and with so much experience. Rutsuko shared her knowledge willingly and with a mastery of English that I could never hope to emulate in Japanese. It was also wonderful to give myself entirely to making felt and to focus on design and techniques without, wondering if the washing was ready to hang out yet, having a cat walk on it or being distracted by the fridge. I feel like it’s refocused me on thinking about what I do not just doing.

I really thought my husband would like these scarves as they’re so restrained but he surprised me by saying they were wishy washy. It hasn’t put me off, I still think they’re great.