The wallpaper block was printed onto silk chiffon which I then nuno felted. This piece wasn’t about the process but the pattern and I decided there was sufficient felt to make three pieces.

Originally I planned to hand stitch the first piece, machine stitch the second and use couching on the third.  This is my first piece and probably has the most printed pattern on it.

Stem stitch in embroidery cottons until Rosie (thank you) pointed out that I needed to vary the threads more and gave me some light reflecting, twisted thread.

I also added some beads in pearl white and grey.

This is the piece I intended to machine stitch but after the third broken needle I gave up and decided to hand stitch. I’d tried putting it in a hoop and backing it but my machine just wasn’t coping. 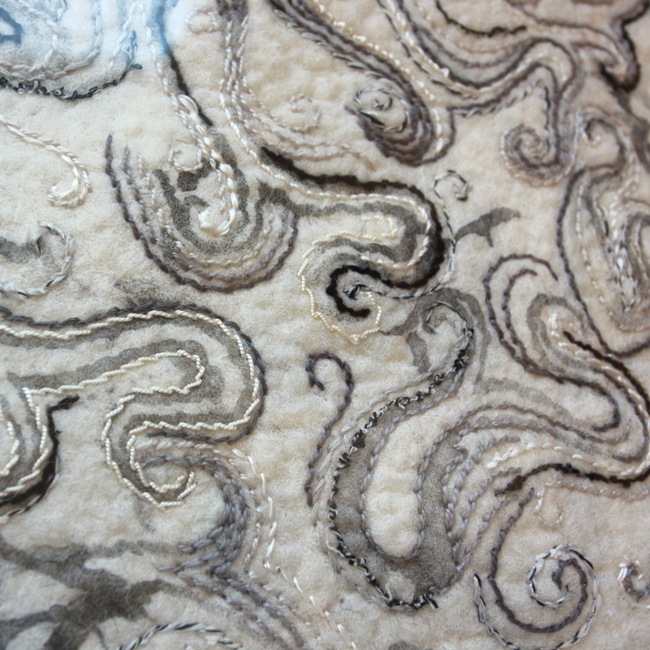 A greater variety of threads was used including perle threads and ones I constructed from various fine threads. 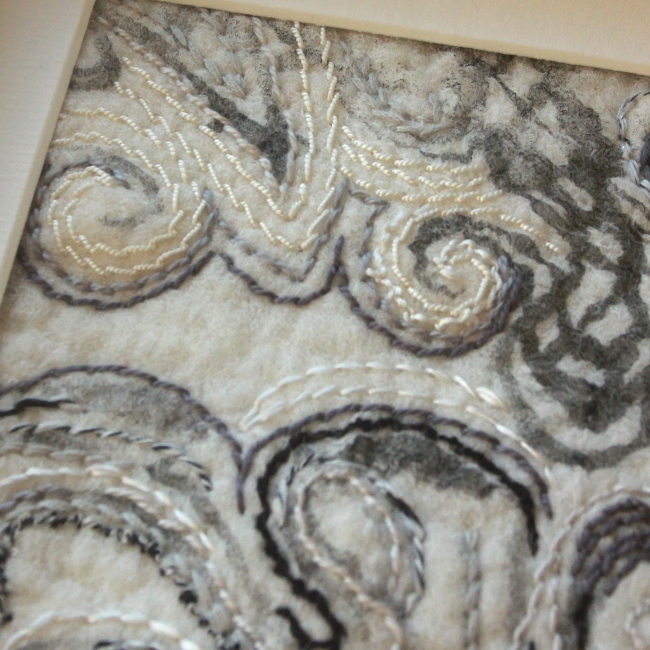 In my stash was a very shiny synthetic thread which fell apart as soon as you cut a length off but it looked lovely so I used it where I could.

I’ve used the couching mixed with stem stitch but added to my work load by spinning a number of threads including, Shetland, Milk Protein and various mixed fibre ones.

It’s hard to remember the last time I used couching, it’s so easy and a great way to use threads that would be difficult to hand stitch with if you tried to pass them through the fabric.

They’re each different and yet so obviously part of a family. All the hand stitching took me a lot more time than I’d banked on but I have throughly enjoyed it and I think they were well worth the effort. They’ve been mounted in box frames and I’ve rather sadly called them ‘Wallpaper 1, 2 and 3’  I know, not very imaginative but the stitching wore me out!

You can see them at Armley Mills  from 14/4 to 22/10. The exhibition is called “Wool Stories – The Felted Mill” and will feature work from more than twenty felt makers.