Increasingly I’m moving to using and exhibiting my felt outdoors. It just seems a natural progression to festoon the garden with as much felt work as the house has received! This will inevitably lead to loss of colour in dyed wools but actually I don’t mind this idea. I’m excited by the thought that my felt will change over time by: becoming paler, stretching or shrinking, gathering moss, changing shade when it gets wet, perhaps even getting a little moth eaten. To watch it change (or not) across the seasons will be interesting.

So when I found some blue tatty rope on the beach I just knew it had to go outdoors. There’s a little spot at the back of the house which is long and narrow and for which I wanted to make a felt hanging. The best part about the rope was the loop at the top, a ready made hanging mechanism. Beach, blue rope, the hanging just had to be blue too. 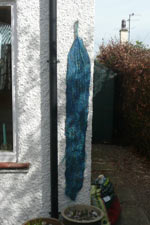 I also like rust so I added a layer of tan merino to begin and allowed it to show at the edges slightly. I covered the rope with three shades of turquoise and blue merino, allowing it to break out and sit on top of the fibres in places. On top I used a few wips of tan and rust merino, ramie,silk and bamboo fibres in tiny quantites for a little sheen and a teal crystal organza to create more texture and give a hint of shine. It’s not a great picture of the hanging but I thought you’d like to see where it will sit. It is south facing so if I leave it there I’m expecting to see colour fading quite quickly. 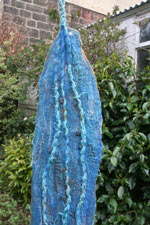 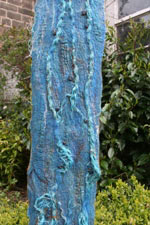 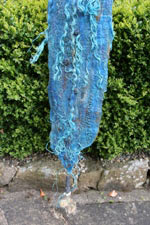 Although I was very pleased with the hanging it just felt like it needed something more. I wondered what I could add and remembered my ever growing stash of beach glass. Excited I pulled out lots of lovely white (it was once clear) glass and sprinkled them on the felt. It didn’t work, but when I replaced it with brown glass I knew I’d hit upon the right thing. It was also lucky to find amongst my threads one in turquoise which was quite twisted. I’ve used some scrappy looking knots to fasten the glass on and positioned it near the rope. This has had the effect of making it look like it became trapped there naturally. 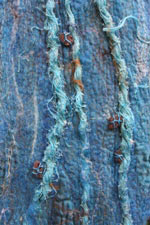 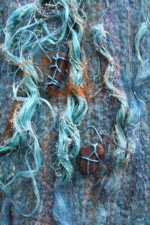 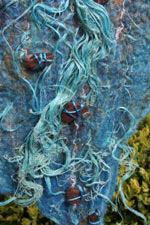 On a separate beach trip I’d found a lead weight from a fishing net and that’s what you can see tied to the bottom of the felt. I can’t decide whether to leave this on or not. It helps to weight the felt and stop it blowing about too much but I’m not sure about how it looks or if it will stretch the felt. It’s tied on using the rope which is embedded into the felt. 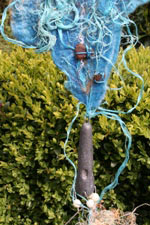 What do you think I should do about the weight, leave it on or remove it? This is a style of felt art that I’d like to do more of and be able to sell. What do people think, would you buy it? It’s not like a sculpture for the garden. It will be quite long lived but it’s condition will contsantly change. Will it sell?