Finally a finished piece of felt but I didn’t leave it there, I went on to stitch the words of the processes e.g. spun, woven onto the felt with the handspun yarn. 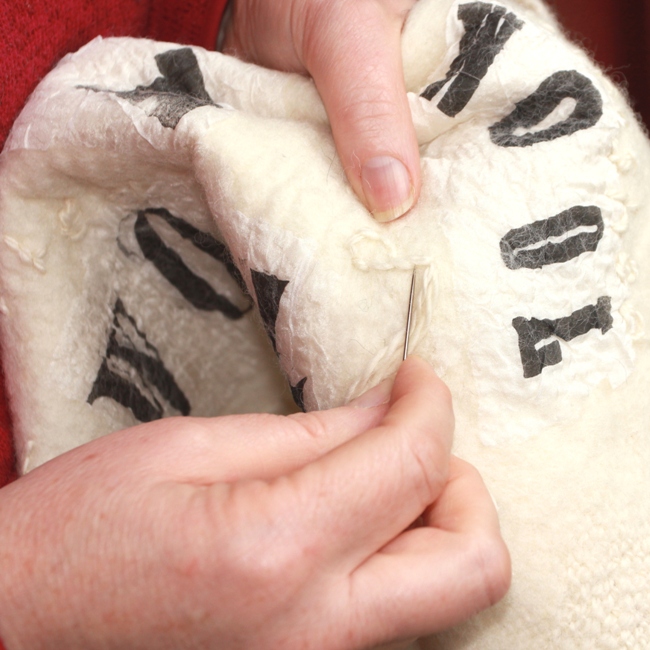 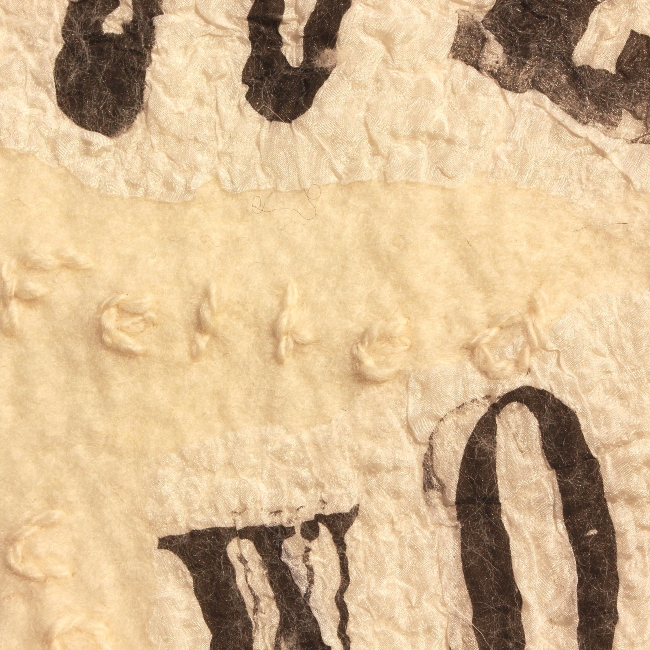 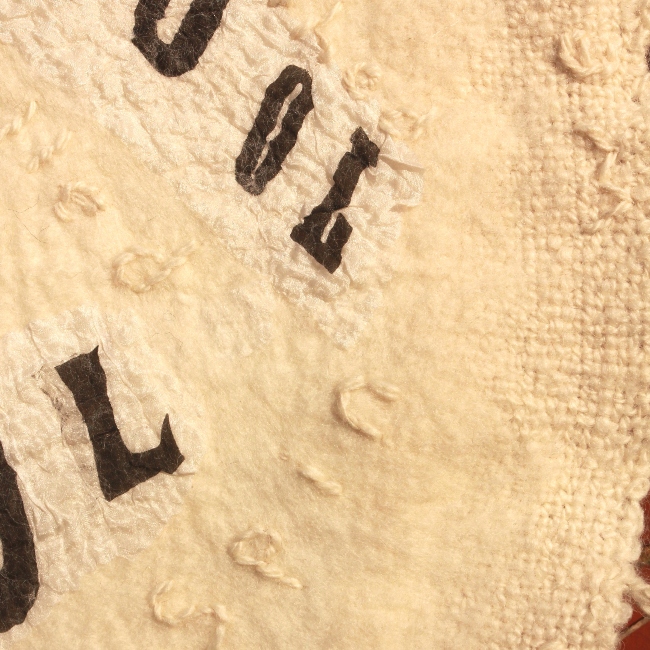 You can see how much the weaving has closed up during the felting process even though I’d been careful not to overwork it. I didn’t want the weaving to lose all definition but I did completely full some sections to use on the top as hanging mechanisms. 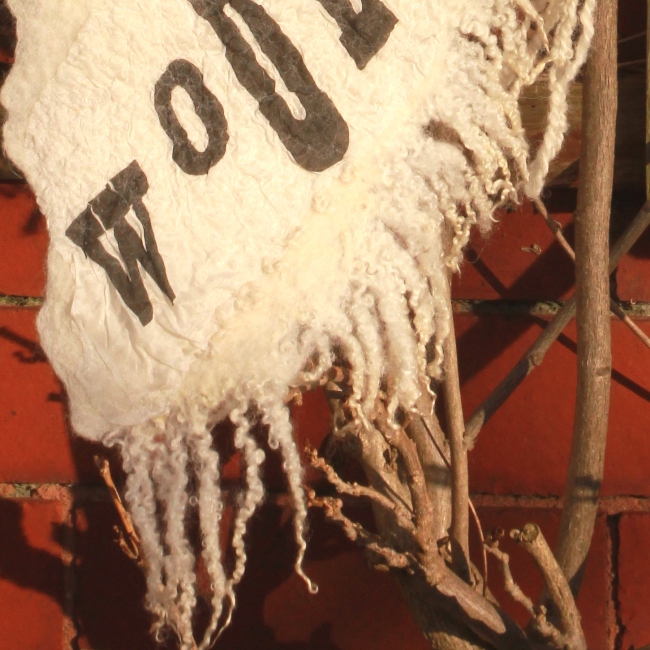 At the bottom is my washed Blue Faced Leicester fleece. It starts with fleece at the bottom up to woven and fulled wool at the top. It’s 100% British wool.

I have the spun yarn, the weaving and the printing so it’s time for felting.

Silk down first then two layers of wool over the top. I sandwiched the edge of the weaving between the layers of wool to hold it in place and make it part of the final picece.

My chosen shape for the wallhanging was triangular with the fringed weaving on one side. 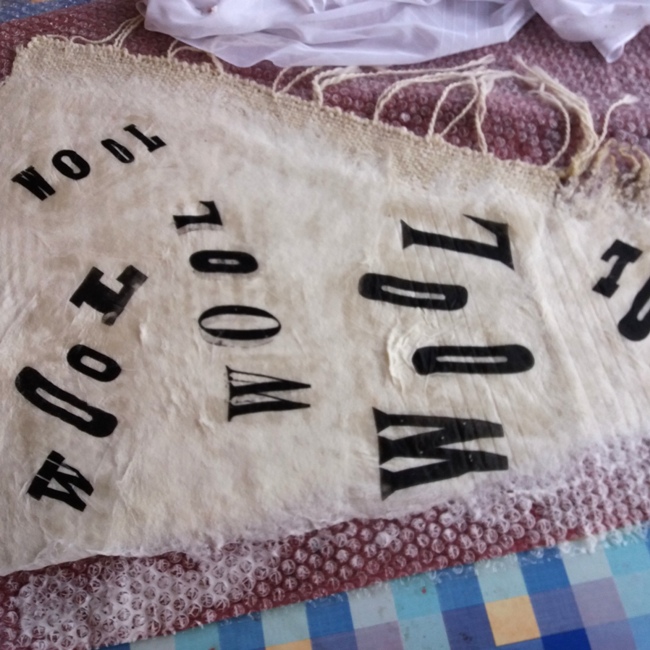 You can see the printing worked out well on the silk paj. Paj is a smooth, closely woven silk, ideal for printing. Next … the finished piece.

Just a quick catch up to show you the white pot now it’s finished and dry. 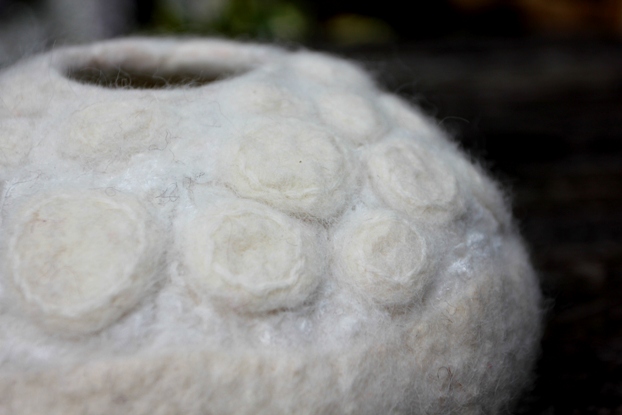 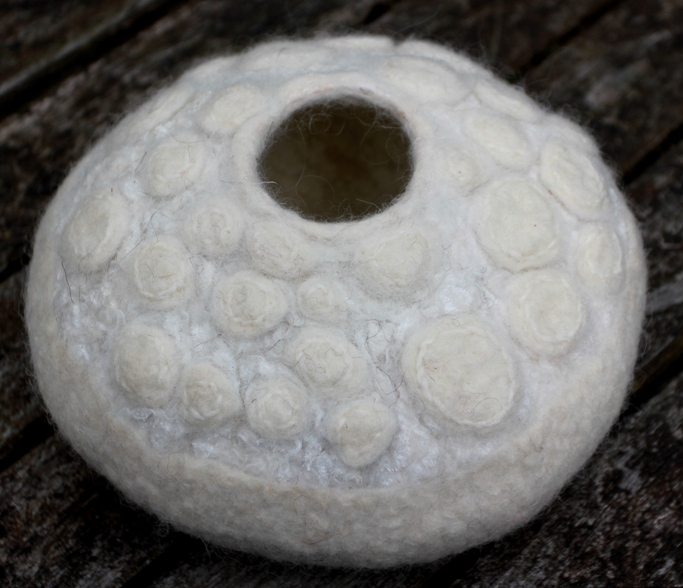 Sadly I didn’t manage to get a picture of the textured interior and this one is definitely going to be stitched into so keep an eye out for the next post.

Many of you will remember the Portland fleece that I was lucky enough to be given in the Autumn. In a fit of, let’s play with raw fleece, I decided to make a seat pad.

When I say raw, I really do mean it. Not washed, all the dirt and other organic matter still in it. I began by   laying out Portland to my selected size allowing 30% extra for shrinkage. In the centre was four layers of a commercially prepared Cheviot top and then a final layer of carefully (believe that you’ll believe anything!) placed Portland fleece.

There’s a substantial amount of lanolin on the raw Portland fleece which I knew would throw the soapy water off. So, going straight to the offensive I  trebled my usual amount of soap. I much prefer to put soap in the water as it gets the wool wet quickly and I knew the Cheviot sandwich filling would take and hold this very soapy water well. However, I knew that wouldn’t  be enough so added more soap directly onto the fleece by rubbing it with an olive oil soap bar.

I left the edges a little drier so that I wouldn’t have too much water cascading to the floor. the plan worked, I didn’t spill a drop of the dirty water on the floor and it meant that the edges didn’t felt in so well and have given me a lovely contrast in texture. The seat pad is very warm to sit on but I think I may try it ten layers next time or indeed make a true cushion which I stuff with washed fleece. Surely that will help with stash busting efforts?

If you received some of the Portland fleece from me I’d be very interested to know what you’ve done with it and did it work? I would dearly like to let the breeder have some feedback.

It’s just so happened that I’ve taught felt flower making twice this week and thoroughly enjoyed both sessions. The first was to a textile group over near Ripon, they hadn’t seen each other for a few weeks so there was lots of catching up, teasing, laughter and of course, flower making. There are so many flowers that I’ve had to pick the best photos to show you. No refelction on the actual flowers, just on my photography.

The second group, today, was one of my monthly workshops across at Bradley near Skipton. We’ve had a really good day, not as much laughter as earlier in the week as most had never met before and they were a most studious and prolific group!  To see the progression in one day from complete novice/first time flower maker to creating specific flower shapes and understanding the subtleties of colour in felt making has been amazing.

We had tea/coffee delivered to the tables,absolutely no chance to slack and there was a kind of possessed frenzy after lunch as people succumbed to the felting bug. There’s no hope for them now but at least it’s fun.

I took the photos for this at least two months ago but it’s taken me quite a while to find the time to write it all up. It’s quite a simple bag with no strap but a nice shape and a good bag to begin with.

It’s listed on the resources page and there’s also a link to it from the column on the right of this blog. I’d love to receive your comments both good and bad so I can improve it if necessary. Enjoy

If you keep Herdwick sheep you have access to lots of fleece. What to do with it all? Well in recent times the fleece has sometimes been buried or burned as it’s had such a small commercial value. Some spin it and a few learn to felt with it Yesterday I had the privilege of teaching a small group how to turn it into felt.

We weren’t working with raw fleece. Halifax Spinning Mill near Selby is able to process small numbers of fleeces so we were working with Rose’s carded batts . I think Herdwick are quite pretty looking sheep but the fibre has a poor reputation with some feltmakers and many are frightened to have a go with it. It has quite a coarse fibre so it’s not suitable for clothing but no reason why it can’t be used for pictures, bags, rugs and other items that don’t go against the skin.

This one would make a lovely wallhanging I think. As with other fibres, it will grab and hold onto yarns, silk fibres and Teeswater curls as you see above and it has a nice mottled grey colour.

I don’t know why two look brown because I promise you they are grey. The pictures don’t show that some pieces also have angelina fibres included. At least one has successfully added synthetic yarn and another has embroidery thread in it.

In my experience, you get a shrinkage rate of around 30% with Herdwick fibres, less than with breeds like Merino and Blue Faced Leicester. You need to use more soap than you would with Merino and to be gentle in the early wet and set stage to avoid spreading the fibres. So yes, it does take more patience to felt with Herdwick but it is possible and not nearly as difficult as some believe. I’d like to leave you with the photo below. This guinea fowl has found the warmest place on the farm for cold feet and the Herdwick sheep doesn’t seem to mind! Thanks to Rita for the picture.

This is my first chance to show you some of the stunning bags that were made at Wakefield last week.

Aren’t they wonderful. It never ceases to amaze me that everyone starts with the same basic materials but ends with such unique work. It was a large group of very friendly women and only two of them had ever made felt before, astonishing.

The day was organised by Sue, to whom many thanks are due. I received excellent directions from her husband, the venue was lovely and the lunch was superb. Everyone (except me) brought food along and it was shared by all. It’s the best lunch I’ve eaten for a very long time – thank you ladies. So if you fancy getting a group of friends together for a felting day and we can agree a date, I’d be delighted to travel to you.

Some months ago my daughter drew a pattern for me, I took one look and thought it would be great made as a rug. It’s taken me a long time to get around to it but at last I can show it to you. 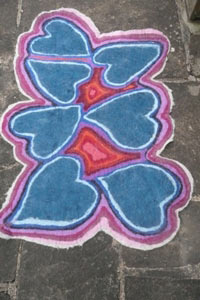 I laid down eight layers of swaledale wool fibres and topped it with blue rug wool and lines of merino. In addition to rolling and stamping I also used the felting roller to help me get the edges nice and firm. Obviously this will now be snaffled by my daughter for her room.

If you’d like to make your own felt rug why not sign up for my workshop on Sat/Sun 26/27 June. Two days tuition, all your fibres, as much tea and coffee as you can drink, plus homemade cake all for just £95.