Here’s a quick guide to making a nuno felt scarf. Nuno is the name for a scarf made from fabric and wool fibres. Natural fabrics like silk and cotton muslin work best but synthetics can also be successfully used.

In this example I’m using a silk scarf which I painted some years ago and then got a little bored of. Time for a makeover! The fibres are Blue Faced Leicester but you could also use Merino or Shetland. I’m also going to decorate it with silk fibres but you can add many types of decoration, just try a few experiments.

Wetting your fabric first will wash out any dressing and allow it to sit completely flat on your bubblewrap. Lay the bubblewrap bubble side down. You will get better shrinkage (and therefore more crinkling of the fabriic) if you use less fibre. So try to pull very finely but evenly. Lay the fibres in random directions. If all the fibres are laid in one direction you will get shrinkage in just that one direction e.g. if the fibres are laid vertically from end to end your scarf will be nearly as wide but much shorter after felting. After you’ve laid out the fibres it’s time to add any extra decoration like silk or soya bean fibres. 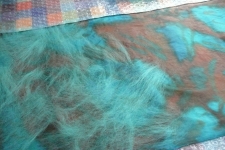 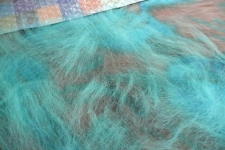 Add cool soapy water (hot water sets the fibres felting before they’ve had a chance to work their way through the fabric) along the length of the scarf and then cover with either a net or a piece of decorators plastic sheeting (as I’ve done) Use your hand to press all the water down through the fibres until it goes flat and give a light rub with a bag. Take off the net (or plastic) and roll the whole thing up in the bubble wrap. Roll 300 times then unroll and roll another 300 times from the other end. Check if it’s ready (see below) or keep rolling. Different fabrics and different fibres require different amounts of rolling. 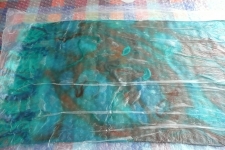 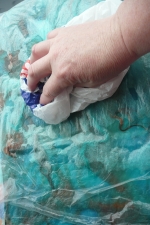 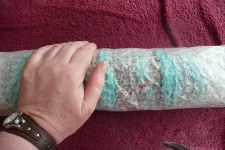 You’ll know it’s time to stop rolling when the fibres are making their way through the fabric. You can check this by feeling for them or sometimes you can see they’ve come through. You can fold the fabric over the back of your hand then lift it up to the light – you may now be able to see them. 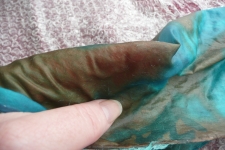 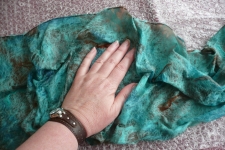 Turn the bubblewrap bubble side up and rub the scarf against the bubble wrap along the whole length. Now you can put the scarf into soapy water as hot as your hands can stand and then throw the scarf 12 times. After each set of throwing check that the scarf isn’t felting to itself. The crinkles will very quickly appear as the fibres are felted When you stop is partly a matter of choice but you shouldn’t be able to pull the fibres off the fabric easily and expect a shrinkage rate of approx. 50%

Wash the soap out and rinse in vinegar water before leaving to dry. You’re done! 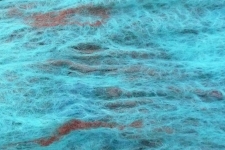 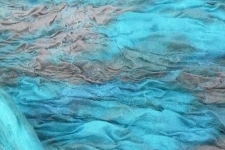 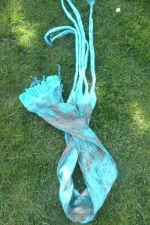 Click here to see details of feltmaking workshops on offer.